The right thing to do 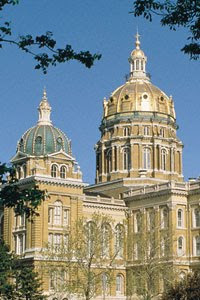 The last 24 hours has been a jumbled up mixed bag of emotions. We headed down to Des Moines last night in less than ideal weather to attend the Public Hearing on House Joint Resolution 6 at the State Capitol. The house was packed as we expected and many, many people were signed up to speak both for and against a proposed amendment to the Iowa Constitution that would strip not only marriage rights away from LGBT Iowans, but also make any union that they could possibly aspire for unrecognized in the eyes of the state. Some of the testimony was so uplifting and some of it was downright disgusting. Iowa at its best and worst was on display last night. That said, everyone in the gallery was civil to each other for the most part, despite the fact that we vehemently disagreed on the subject matter. That, folks, is what Iowa is all about.

Both sides got equal time and although she had signed up to speak, Heidi did not get a chance to. She did publish her prepared remarks on her blog which I encourage everyone to read. I was even interviewed very briefly by the Des Moines Register and made the article in this morning's paper. I expressed my doubts that any minds were changed by the testimonies given that night, all the while hoping beyond hope that perhaps some of those that had declared support for the amendment would have a change of heart.

I knew that this wouldn't happen. With 56 Republican co-sponsors, the bill was a shoo-in to pass. What I didn't expect were 3 Democratic representatives to join in with the GOP and vote for the resolution, passing 62-37 with one Republican representative absent. These three representatives are, in my eyes, more worried about saving their own political skins than they are about doing the right thing. When it comes to this issue, those that won't stand up and do what's right are no different from the Republicans.

Conversely, we have our own Beth Wessel-Kroeschell who has fearlessly and consistently led the charge against the amendment. She has a solidly Democratic district so I'm not sure that politically such a stand is much of a risk to her, but my appreciation of her continued support cannot be understated.

Still, despite the fact that the outcome was expected and I knew Beth would be a loud and vocal advocate, I reacted poorly to the outcome. I was sad and depressed after work. I wondered if it was even worth it to go down last night. Clearly, if these legislators could not be moved by these stories, is there anything that will work? Was there anybody that could voice support of the amendment without quoting from the Bible or referencing the Judeo-Christian God? There were times last night that I felt like I was in Sunday School, being forced to listen to Bible verses. It made me want to say a la Eddie Izzard "Corinthians letter to St. Paul, Chapter one, verses one to a million. FUCK OFF!" Tonight, I wanted to throw in the towel because it seemed like it just wasn't worth it anymore. We can't change their minds and they can't change ours. And now that they're in control, what can we possibly do?

But no, that's not what we do. The other side will work tirelessly and now they have momentum so they have no reason to let up. That means we have to keep working and educating and speaking our minds. I've been thinking a lot this week about the phrase "having the courage of your convictions." And that's what it boils down to for me. Talking the talk at this point is not enough, at least not for me. I have to be willing to give up a weeknight to drive down to Des Moines in a snowstorm to be one more body in support of all my LGBT friends. I have to be willing to be interviewed for the paper and not care who might see it. I will likely annoy a lot of people and sound like a broken record but damn it, this is too important.

As Heidi said, my marriage will never be voted on - who are you to say that some people's should be?

Two steps forward, one step back. That's how this kind of stuff goes. I know that ultimately it's going to take an US Supreme Court decision to settle this once and for all. Until then, I will continue to work tirelessly in the ways that I am able. What I will not do any longer is listen to any argument in this debate that invokes religious fundamentalism or the Christian God. At this point, it should be like using Nazis in an argument. You do it, you automatically lose.

This is my last word on this particular chapter but you can bet your last dollar I'll still be fighting for it. The problem with being passionate is you open yourself up to being hurt, but it's better than not feeling at all. And as Carly Simon says, it's the right thing to do.
Posted by Dan at 2/01/2011 09:30:00 PM