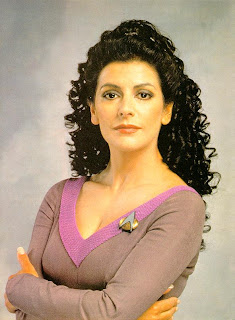 In the last two days, I've had two completely unrelated events cause me to reference Counselor Deanna Troi of the Starship Enterprise. Honestly, I had kind of forgotten about good old Counselor Troi, but each time I invoked her name it was kind of to make fun of her seemingly relative uselessness aboard the Enterprise. Troi was a half-Betazoid (a telepathic race of humanoids from the planet Betazed), half-human empath and her lineage seemed to make her perfectly suited to be a ship's counselor. But, as Marie Sexton pointed out to me on Twitter last night, her most common line was "Captain, I'm sensing that something is amiss." My response to that was take off the "is amiss" and you'd be more accurate. For some reason, I always liked her, even though her nickname could have been "Captain Obvious." I'm sure that the fact that she was blazingly hot had absolutely nothing to do with the fact.

I always liked the Troi episodes, and there were never ever enough of them for my liking. In many ways, she had a lot in common with my other most-favored-female-sci-fi-TV-character Dana Scully. It never failed, whenever it was a Troi episode, she was always going to be in mortal peril, or at least in serious jeopardy. And since, like Scully, she was a main character and not just a random ensign, you could always rest assured in the fact that she was going to make it out alive, free to be aggravatingly vague (and massively attractive) another day. 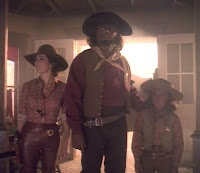 My favorite Deanna Troi episode is probably "A Fistful of Datas" in which she, Lt. Worf and Worf's son, Alexander, are taking part in a holodeck simulation of what Troi calls "the Ancient West." And by the Ancient West, she means "the Old West." An experiment that Data was doing causes a malfunction in the Holodeck and suddenly, all the bad guys have Data's face. Not only that, all the safety features of the Holodeck have been overridden and now the holographic bullets are deadly. Surprisingly, this is not a Troi-in-jeopardy episode - she's actually quite crucial to the outcome. In spite of all that, it was the outfit and Western drawl that Deanna put on for most of the episode that sealed it for me. I really need to get that disc of ST: TNG from Netflix and watch it again. 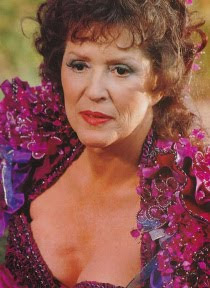 I also always loved the episodes that Deanna's mother, Lwaxana Troi showed up in. Lwaxana was played by Gene Roddenberry's widow Majel Barret and was the closest any character came to being a drag queen on that show. She was outgoing, overbearing and had a not-so-thinly-veiled thing for Picard. My father always hated the Lwaxana Troi episodes, but I'm thinking that it would behoove the makers of ST:TNG to bundle up all the Lwaxana episodes and sell them as a piece, kind of like they did the Borg episodes. But I imagine that before long, all the episodes from TNG will be available for individual purchase through something like Amazon Video on Demand. In essence, that would be the same thing.

Deanna was never very respected on the show, at least not until the final season when she took her bridge officer's training test and they covered up her cleavage. You would think that someone as shallow as I seem to be when it comes to Troi would have found great issue with this, but in fact, I don't. I love the evolution of Troi's look through the seasons, especially when it comes to her hair. What started as the tragic-phallus look in season one transformed into the tumbling curly locks of the majority of the series. Then for the final season and all the TNG movies, she looked positively beautiful, sporting a newly straightened do. An empath never looked better.

Heidi and I tried to watch the first season of ST: TNG a couple years back and we were shocked at how bad it was. Wooden acting, plodding stories, it's kind of amazing it made it through one season, let alone seven. But it did get better and is the Star Trek that I grew up initially hating and then loving. We watched it every night at 10:30PM in my dorm room at Iowa State until we'd seen every episode so many times we wanted to barf.

I have no idea what Marina Sirtis (who played Counselor Troi) is up to now, but I'm grateful that she gave the world the character she did, even if we mostly think of her as sexy but mostly ineffectual. What I wouldn't have given to have seen her traditional Betazoid wedding.

Brian and I watched S1 recently, too. It was pretty bad!