The cheese-ball is back 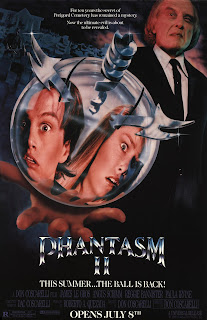 Anna started school on Thursday and somehow, the planets aligned and the first day of school coincided with my day off. So not only did I get to see her off to school in the morning, but I also got to spend time being a layabout around the house, in control of the TV for what seems like the first time in forever.

I had seen that Phantasm II had been added to Netflix Streaming recently. I've always enjoyed the original Phantasm, even though it's absolutely nuts and incomprehensible on so many levels. A creepy tall man undertaker that is robbing graves to turn into midgets so that he can send them back as slaves to his planet (or is it another dimension) is just too strange for words. His secret is safe until small town kid catches a glimpse of The Tall Man picking up a casket all by himself. From that point on, it's an at time creepy, other times cheesy thrill ride that works with its obviously small budget. While not as overtly dreamlike as the Nightmare on Elm Street movies, I think that part of the appeal of Phantasm is its mystery - the "what the hell is actually going on here?" quality makes it worth sitting through 90 minutes of pretty bad acting (except for The Tall Man, of course) and very bad late 70s hair.

Fast forward 10 years and Phantasm finally got the sequel that fans were clamoring for. I remember watching parts of this movie on HBO as a teenager - or maybe it was home video, I really can't recall. But at the time I watched it, I had not seen the original film, so I was interested in it from a horror movie fan standpoint, but not so much as a fan of the original movie. So how does it stack up against the original? Well, in many ways it's a bit of a remake of the original movie, only with a bigger budget while also serving as a sequel. It picks up right where the original left off. Some of the original cast is back, but the actor who played Mike in the original was not back. But obviously, Angus Scrimm had to return as The Tall Man. Just as there is no Blondie without Debbie Harry, there is no Phantasm without Angus Scrimm.

I tweeted the title of this post when I was about half way through the movie - the tag line really should have been "the cheese-ball is back." All the excesses of 80s horror cheesiness are on full display. The women all have hair that has been Aqua-Netted within an inch of its life, there are more "gotcha" moments than you can shake a stick at, and the acting, while passable, is still pretty bad. But all is saved by The Tall Man. All Angus Scrimm has to do is walk on the screen and all is forgiven. Naturally, he has the best lines of the film which is saying something because he really doesn't talk that much. My favorite line was when he was holding the Catholic priest up by his inverted crucifix necklace and he says with patented Tall Man menace "You think that when you die you go to Heaven...you come to US!" Apparently Angus Scrimm, who is still alive and kicking, has embraced his role as The Tall Man and appears at horror cons across the country. If I played the Tall Man, I totally would. *sigh* If only Faye Dunaway would embrace her role as Joan Crawfod in the same way. 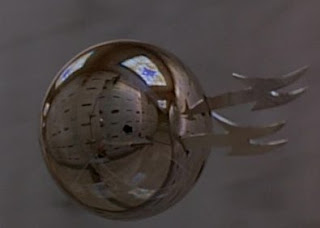 The spheres are also given an 80s update. They're capable of much worse than they were in 1979. One sphere digs its way through a guy's back, spinal column and up through his internal organs, only to get stuck on its way out his mouth. I had a hard time with this - not because of the gore, but seriously, anything capable of boring through the bones of the spinal column would certainly not get stuck at something like a jaw. But I'm sure that it was so they could show the goriness that resulted from the ball getting stuck, with blades continuing to turn as it shreds more facial flesh.

Even though it was cheesy, I really enjoyed watching it again, and naturally, the end set up for another sequel. Phantasm 3: Lord of the Dead and Phantasm 4: Oblivion are already out there, but sadly, not available on Netflix Streaming (DAMN YOU SALAZAR!) and apparently, there's a fifth one on the way.

Phantasm II is a fun and cheesy 80s take on a classic 70s horror film. It's well worth your hour and 39 minutes. Long live Angus Scrimm! (even though he's assured immortality already.)

It's a privilege to share this miraculous testimony to the world. I'm Beth Walters from England. My husband divorced me 4 months back and I have been filled with remorse for I didn't know what to do to amend issues with my husband. I searched for help on the internet on how I could get help in my marriage and I discovered great testifiers about WEALTHY LOVE SPELL who has been progressive with his spells. I got in touch with him and behold, Dr.Wealthy told me that he will prepare a spell for me that will bring back my husband. I was skeptical but I had no other option but to work with him. 2 days later, my husband called me that he's coming back home and from that day till this moment, we have been living peacefully. He is back now with so much love and caring. today i am glad to let you all know that this spell caster has the power to bring lovers back and the most surprising thing is that our love is very strong now, every day is happiness and joy. and There is nothing like being with the man you love. I will highly recommend Dr.Wealthy  to anyone one out there who needs help whatsoever. If you have any problem contact Dr.Wealthy, i give you 100% guarantee that he will help you!!.