Loneliness is a cloak you wear 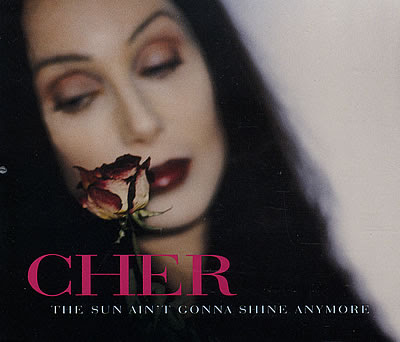 As I was doing dishes tonight, I was listening to my iPod and a Cher song I had completely forgotten about played. Taken from what is probably my favorite Cher album, It's A Man's World, "The Sun Ain't Gonna Shine Anymore" is one of those Cher songs that, when you think about it, is perfect for Cher. Made famous in 1966 by The Walker Brothers, it's a melancholy song that makes great use Cher's lower register. It was used to great effect in The X-Files episode "The Post-Modern Prometheus," an episode in which Cher (as well as Roseanne Barr) was asked to appear, but she declined. Cher later regretted that decision, although probably not as much as she regretted the Lori Davis informercials.

As I said, the song has a melancholy streak a half a mile wide, and it is very autumnal. As my friend Steve said, I am over this summer shit. I want cold bones and moods and rain. This song fits in very well alongside other such autumnal hits of Dan like October Project and Madonna's Erotica album. The first line alone gets me "Loneliness is a cloak you wear/A deep shade of blue is always there." Let's have a listen. This version is clearly not live, which is a shame because Cher really can sing live.

Not one to forget where her bread is buttered, Cher also commissioned a couple of dance remixes for the clubs. I have a few remixes of this song in my iTunes library, but I don't know that any of them are official remixes. They are a bit hit and miss, which is par for the course with Cher remixes. For every "Believe (Almighty Definitive Mix)" you get at least two completely unlistenable remixes. These aren't bad, but they kind of wreck the melancholy of the song, even though sometimes melancholy mixed with a driving dance beat works much better than you might imagine.

While I was listening to this song, I got to thinking about all the other people that have recorded it. Of course, you have the Walker Brothers original. Another worthy version is by Keane, who usually can nail melodic melancholy pop. They do a pretty good job on this one.

It's not quite Cher, but really, what can be? The only other version of this song I have "The Sun Ain't Gonna Shine Anymore" is the high-nrg version by Quantize from the Gay Classics series which puts together a bunch of songs that really don't go all that well together if you think about it . Anyway, I'm pretty sure I snagged this song off of Audioscrobbler back in the day. I'm not sure this works any better than Cher's attempts to rework this for the gay clubs, but you certainly can't fault them for trying. And besides, I have kind of a soft spot for those high-nrg covers of popular songs by unknown artists.

Still, for my money, Cher has the best version. Why? Because, as is pointed out on Twitter nearly daily, she's fucking Cher.

Related posts: Cher's It's A Man's World album revisited, as well as my post on "The Post-Modern Prometheus" episode of The X-Files.