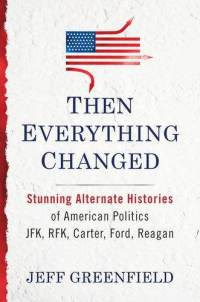 I like and don't like "alternate history." On the one hand, I find it interesting to contemplate what might have happened had certain events happened or not happened. But more often than not, alternate history fiction is handled very clumsily and is usually reduced to "what would happen if someone showed up at the US Civil War with automatic weapons?" THAT kind of alternate history doesn't intrigue me in the slightest and honestly, that's probably more science fiction than anything else. But as is pointed out in Jeff Greenfield's Then Everything Changed, history is made up of series of events that, had things gone just slightly differently, we might be living in a world that is very bears little resemblance to the one we know now.

That's the crux of this book that takes three late 20th century events - an unsuccessful attempt on President-elect John Kennedy's life in 1960, the assassination of Robert Kennedy in 1968 and the 1976 election between Gerald Ford and Jimmy Carter - and turns them on their head. In these alternate histories, there is never a President John F. Kennedy, never a President Richard Nixon and never a President Jimmy Carter (or Ronald Reagan for that matter.) The three alternate histories are interesting to me as someone who laps up late 20th century history like a cat at a bowl of milk. Crucial events of the last 50 years play out very differently with just the slightest of change. With LBJ as President, the Cuban Missile Crisis ends dramatically differently. RFK surviving his assassination attempt spares the country the agonies of Watergate - maybe. And when Ford recovers from his debate fumble of "there is no Soviet domination of Eastern Europe and there never will be under a Ford administration" and wins the 1976 election, the economic troubles attributed to Jimmy Carter are instead, blamed on a failed Republican presidency, opening the doors to a Democratic win in 1980.

These are not spoilers - most of this is detailed in the product description of the book. The book succeeds amazingly with details, names and faces and semi-imaginary quotes. I was riveted and, at times, had to remind myself that I wasn't reading actual history - that's how convincing the writing is. The only fault I could really find was that Greenfield tended to go for the cutesy ha-ha moments a few too many times. For example, in the 1976 election, Ford wins the electoral college and Carter wins the popular vote. This leads freshman Congressman Albert Gore, Jr. to champion a bill stating that the presidency would go to the winner of the popular vote. There's an even better one, but I wouldn't dream of spoiling it and depriving you of the "ugh" moment I had.

I recommend this book wholeheartedly for political junkies and anyone who loves 20th century American history. The last part of the book, which I admittedly skimmed, gives information as to how Greenfield constructed quotes and gives evidence of things that actually happened to support his version of events. A fascinating read.