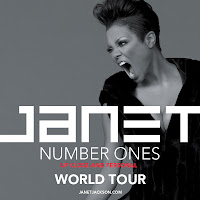 Let's get this much out of the way - there was no wardrobe malfunction.

Really, there were no malfunctions of any sort at the Janet Jackson concert last night. Even though I was there, I'm still kind of incredulous that she played the Iowa State Fair, but hey, who am I to complain. I got to scratch another name off my must-see-live bucket list and got to be in the company of some of my nearest and dearest friends. I also got to participate in the unique experience of the Iowa State Fair (unique, even though it's pretty much the same thing year after year) in a very small dose, which is about all I can handle of it. We ate all the crappy fair food, including red velvet funnel cake, breaded green peppers, polish sausage with everything on it and, of course, corn dogs. We even snapped a couple pictures of us going all Michelle Bachmann on the corn dogs, but those will never see the light of day on any social media EVER. We did, however, pass on the fried butter. Just thinking about it makes me want to hurl.

In all honesty, for as much mileage as I have gotten out of "Janet Jackson's playing the State Fair? How the mighty have fallen!" over the last few months, I was very glad to see her in a setting like this. The Grandstand has about a 10,000 seat capacity and I'd say that a good chunk of those were filled last night, although the show was not sold out. The older I get, the less I like spending tons of cash on arena shows where the performer is so far away from me you can barely make them out. And stadium shows? Forget it. Obviously, Madonna is a huge exception to this blanket statement. The day she plays the state fair will probably be the day I fall over dead.

We had pretty decent seats, although there was a pole next to us. Still, I think most everyone had a pretty decent view of the stage. 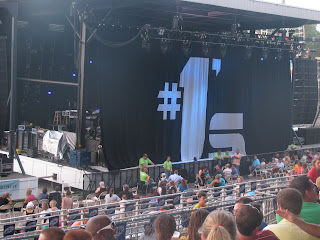 Despite the proclamations on Twitter of the local Top 40 radio station saying she would start promptly at 8pm, she didn't actually take the stage until around 8:30. Even with that late start, she was still earlier than Madonna ever is. This, of course, did not stop my friend Jeff and me from making a joke about how Janet had to quick run to the local Walgreens that we could see from our seats. That joke has its origins in a 1991 Whitney Houston concert that he and I attended in which we said "Whitney had to quick run to Target to get some Lee Press Ons." 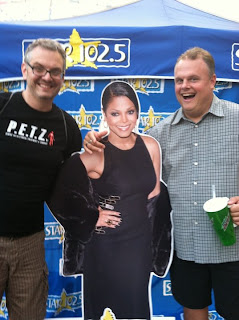 Jeff (right) and me giving Janet some pre-show tips.

As for the concert itself? Well, it was a bit of a mixed bag for me. Overall, I really enjoyed it. Janet looks good and she's one of those people that's been off the pop music radar for so long that you really do forget how many bonafide hits she's had. Rhythm Nation alone had something like seven top 10 hits. And even though I didn't care much for it at the time, Janet spun off many hits as well. It wasn't until about 2003-2004 (the time of the infamous Super Bowl wardrobe malfunction) that her hit-making luck seemed to run out. She did not cheat us either on the hits. Pulling songs only from her 2-disc greatest hits record, Number Ones, she played all the fan favorites. Most of these songs were not in their full versions, but rather medleys of hits. On the surface, this might seem like a bad idea or kind of a cheat way of cramming a ton of songs into a concert. However, it really worked well and served as a bit of a sampler of the 25 years of songs she has to choose from. The only real bone I had to pick with the song selection was that there was no "Black Cat" and the shitty "Feedback" was included ("something heavy like my first day period." SERIOUSLY.) 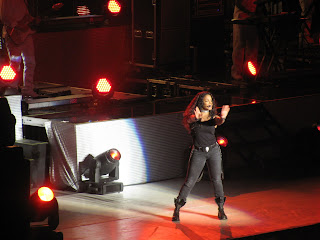 I took about 12 pictures and only about 3 actually came out! This is the best one.

She was in good physical form and, as I said, looked good and had a lot of energy. That said, I couldn't help but notice the presence of a VERY significant backing track during the concert. This isn't surprising in shows like this. But the thing is, the backing track should be there to support the live vocals, not to be the substitute for live vocals. It was hard to pin down whether or not she was singing live of lip syncing in many places, but I would say that at least half the songs were primarily lip synced or the live vocals were drowned out by the backing track. Normally, this would bother me - it bugs me when Madonna does it, but with her, you can usually hear her very live vocals over the backing track. With Janet, she's always had kind of a paper thin voice and I've heard stories of her previous tours being primarily lip synced so I wasn't terribly surprised. Still, I wouldn't have cared if the dancing had been toned down a little bit to provide for a little bit more of a live experience. (For the record, the second part of the show, which featured several of her ballads, was very much performed live. She has some vocal chops, but I just don't think that she can dance and sing well at the same time.)

The show had a fun energy, even though the video interludes threatened to bring the show's forward momentum to a screeching halt. For someone who's been in the touring business for so long, that amateurish move surprised me. And usually those interludes provide a chance for a outfit change. Not this time - Janet never changed her clothes once. If this had been a Cher show and there were no costume changes, as Cher herself has said, drag queens everywhere would think she'd lost the will to live.

She ended with a great version of a song I had forgotten about - "Together Again" which wrapped up with pictures of her and Michael. The song has clearly taken on a new meaning for her and you could tell by her enthusiasm in performing it.

While the show was fun, let me take a minute to talk a bit about the venue. I don't know that I'll go to another Grandstand show. For one, the chance that your view is going to be obscured by a pole is just too high. Also, the seats SUCK. As Heidi mentioned, since it's an outdoor arena, the seats have to be at least a little bit industrial, but they could still be comfortable! All in all, we'd have rather sat on benches.

It's one of the first concerts I've been to that I feel I slightly overpaid for, but still. It was fun to sing along with all those songs that were a huge part of my high school and college soundtrack. I was also glad that Heidi went along with me even though Janet was only sort of her thing. She and I usually don't go to concerts together, and now we've hit two this year.

In the end, I was just glad to finally get the answer to the question posed by Janet. "Who's that eating that nasty food?" Without a doubt, it's State Fair attendees. I'm going to have to do double time at the gym this week.