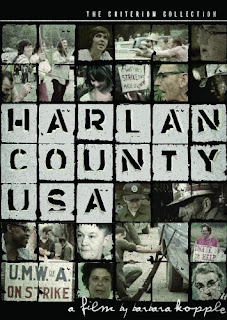 One of the things I did accomplish over the last few days has been watching the Netflix I just returned - Harlan County, U.S.A. It's another documentary, and another one by Barbara Kopple. She also directed the most recent documentary I watched - American Dream - and, well, wouldn't you know, she also directed yet ANOTHER documentary I want to see, that one being the one about the Dixie Chicks called Shut Up & Sing.

This one was about a mid-70s coal miner strike in Harlan County, Kentucky. The men who worked in the coal mine decided to join the United Mine Workers of America (UMW of A) and the company who owned the mine, Eastover Mining Company which in turn was owned by Duke Power, refused to accept the contract that the union had to offer them. Consequently, the workers went on strike. The conditions in which the miners live were atrocious - nothing more than lean-to shacks with no running water. The documentary shows meetings that were called to organize the picket lines and the taunting of scab workers as they crossed the picket lines. It demonstrates the utter depravity in which so many of the people live.

Not content to show the corruption within the power company which owns the mine, it also demonstrates the corruption within the UMW of A itself. Tony Boyle, the president of the union at the time, orders the execution style killing of his challenger to the presidency Jock Yablonski. Not only is he murdered, but his wife and daughter are also murdered as well. The effects on the health of the miners is also shown, specifically the developement of black lung in some of the miners.

I didn't know much about coal mining before I started watching this movie. I don't know a lot about the specifics of it after watching the movie. I don't know if the conditions reflected in this now 30 year old film accurately reflect the conditions in which miners live now. I would sincerely doubt it, but since organized labor has lost most a lot of its power in recent years, I wouldn't be surprised if little has changed.

What I loved most about this movie was its use of music - and this is no surprise to people who know me. The songs are all very O Brother, Where Art Thou - many of them featuring bluegrass legend Hazel Dickens. It left me with the impression that there are absolutely no songs about coal miners that are even remotely happy. And, well, who can blame them? I found out that the soundtrack to the film was available on iTunes and I bought it. Originally, I was only going to buy the Hazel Dickens songs, but 7 of the 22 songs were her, and for another 3 bucks, I could have the whole thing. And since I had 40 dollars in iTunes gift cards from Christmas, I thought, what the heck? And yep, all the songs are pretty damn depressing! But they are good. You have to be in a certain mood to listen to them, but they capture the spirit of the movie so completely and utterly, it's hard not to think of the movie when you listen to them.

Ultimately, I didn't like this movie quite as much as I did American Dream. I don't know, there was just something missing from the denouement of the documentary. The loose ends weren't tied up all that well, and I didn't get a very good sense of closure, but I certainly don't look at the movie as being a waste of my time. And I don't know what it was up against in 1976 Oscars, but it almost certainly deserved its Best Documentary Feature Oscar, an honor it shared with American Dream.