One of my favorite books as a kid (and consequently, one of Anna's as well) is Last One In Is A Rotten Egg. It tells the story of a little boy named Freddy who, not knowing how to swim, has to stay in the shallow water while all of his friends, who are "deep-water swimmers" get to go in the deep water. One day at the pool, some older kids push him in the pool which causes him to avoid the pool altogether for awhile. But once he goes back, he asks the friendly lifeguard to teach him how to swim and by the end of the book, he's taking on the bullies that pushed him into the pool and swimming happily with his friends in the deep end.

This picture from the book always scared me when I was a kid. 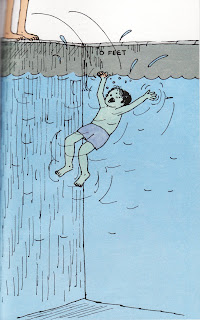 I think what scared me the most about that is the look of sheer terror on Freddy's face. That combined with the fact that, growing up, I had an absolutely unnatural fear of the water which turned that picture into the thing of nightmares. In fact, when I saw that book at the library about 2 years ago, I had completely forgotten about it - but the first thing I remembered was that picture. And even though I eventually learned how to swim - not well, but well enough - I am still a bit freaked out by deep water, oceans most especially. After reading the description of drowning in The Perfect Storm, I've decided that if I can make it through life without drowning, I'll count myself lucky.

I've been thinking a lot about the deep end these days - and I'm talking the deep end of life rather than the one at your local pool. There's a lot of changes and new things happening in my life these days, which explains the relative lack of posts, and I'd like to apologize to all those who have probably been feeling ignored - that has certainly not been my intent. I'm trying to spend a little more time with myself these days and that pretty much necessitates spending time away from the computer and blogging. But thinking about these things is like jumping into the deep end. There are times that I feel much like Freddy does in that picture up there.

Enter Debbie Harry (as she has seemed to do so much this summer) with the perfect song for this kind of situation. It's called "Deep End" (naturally) and since it's from the new album Necessary Evil, I have absolutely no idea how I have heard it since it's not even out yet. *whistles innocently* But in any event, I have. While not the most well written song in the world - you can take this part to heart.

i love finding out books i adored as a child, and then re-living whatever memories they stir up. I was obsessed with puff the magic dragon and as a little boy was devastated that he was left all alone by jackie paper. Boo that whore.

Hi Dan--I consider you a friend and I respect you very much. If you need to be by yourself I completely understand and respect that. If I can help with anything--let me know. :)
Always,
Marc