My kid knows me

The other night, after a particularly grueling day at work (the whole of last week is probably best described as grueling - I can think of some more colorful terms, but will refrain), Anna came up to me as I was laying on the couch, nearly passed out and said that she had something to give me. She had a piece of paper in her hand so I presumed that it was yet another drawing that she had made for me. Not that I don't love it when she draws things for me, it's just that I only have so much space for things like that. I was ready to do the dutiful dad response of "oh, honey I LOVE IT" when she handed at to me and said, very matter-of-factly.

"It's a zombie bookmark, Dad." 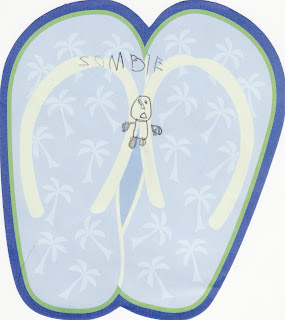 She had to ask me how to spell "zombie" (look at that cute backwards "z") but it's yet another great example of how I won the kid lottery. She also added, after giving it to me, "sorry he doesn't have any blood on him, or a gun."

so cute :) Darren and I SO need the adoption talk again :P

PS how was the first day at work with your new addition?