Oh, your hair is beautiful

I found out last night when I arrived home from work that the lady who cuts my hair had to cancel my haircut for next Tuesday. Turns out she had to go testify in court or something - like that's any type of excuse. ;) I mean, my hair has needs, judicial system be damned. Seriously though, after being cranky about the canceled appointment and then even crankier about her inability to squeeze me in any time between now and when we leave for Phoenix next week, Heidi hit upon a brilliant idea (as she is prone to do, most especially in situations such as that one.)

Once upon a time I used to get my hair straightened. I remember the first time I ever got it straightened - I was in awe of how good it looked. It was the hair I wanted my whole life but was never able to achieve thanks to a curl gene that kicked on right about the time I hit puberty. Mostly, I just wanted the Tobey Maguire look circa 2000, but I digress. Hair straightening involves putting some pretty damn harsh chemicals on your hair and burning you scalp a bit, but man, it was so worth it. I loved it. However, it was expensive, and when we moved to small town Iowa, I kind of shied away from it as it didn't seem to be working as well, plus I was kind of tired of the rigamarole every 3 months.

So anyway, last night, Heidi thought, since I couldn't get my hair cut, she would go out and look for the hair straightening equivalent of a home perm. After she left, I got on the web and read horror story after horror story of home hair straightening gone wrong - with the results usually being serious scalp burns, hair falling out, or it just simply not working. I thought, surely she won't find anything, so nothing to worry about. Not so.

After I got done putting Anna to bed, I found out that she had indeed found it and so I figured, even with the horror stories, what the hell? So in the kitchen, with me sitting on Anna's little step stool, Heidi straightened my hair last night. There's a great picture of me with a Target bag clothespinned to my head which will decidedly NOT be going on the blog. Suffice to say, the stuff was stinky and most surely toxic to most every living thing, but I put it on my head anyway. There was a comical moment with Heidi trying to find enough hair on my head to put between her hot iron - even though I consider my hair right now "long" it probably doesn't qualify for that definition in anyone else's book.

Predictably, my hair resisted it, but ultimately, it acquiesced. And behold: 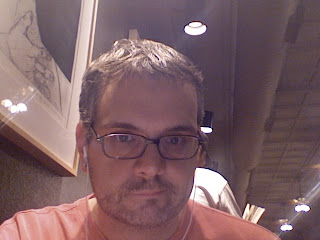 Heidi doesn't like it right now because it's flat but part of that is because I can't wash it till Friday night. But still, I think it made me magnificent.

my hair has needs, judicial system be damned...

HAHAHAHAHAHAHA Somehow, someway, i am going to work that into a conversation at work today :P hehe

You are always magnificient! Love you, boo.

The first time I had it done in a salon and paid a lot of money for it, but it was worth it. Had it spiked and everything. Since then, I did it myself which I wonder if it contributed to a lot of hair loss.