Tonight I'm in Iowa City. I'm here for the AIDS/HIV conference the UIHC is putting on tomorrow. I've been to it a couple times and it's usually very interesting - mostly, it makes me realize how little I know about the current treatment of HIV, which is mostly due to the fact that I don't deal with it very much day to day. It also is coupled with the reality that things change so damn fast when treating HIV and AIDS. So we'll see how it goes. I am usually very shy at things like this - I'd be better off going with someone, but then I'd just be irritated because I couldn't go to the Java House and sit and mooch free wireless and blog endlessly. Which is what I'm doing now. (and my VERY NICE hotel which has everything you could possibly hope for DOES NOT have wireless. How low end can you get?)

I have already had my St. Louis Blues au lait, which is required drinking when you come to Iowa City. Try as I may, I can't seem to replicate it at home, even when you bring the St. Louis Blues beans home with you to brew in your own pot. I am tempted to get another but that will mean I will be up until the wee hours and, well, I can't have that now.

Iowa City is so fun to come back to. I just love being downtown and amongst the folks that make Iowa City unique in Iowa. It is, for those that don't know, the liberal bastion of Iowa. It is also the place where I spent the bulk of my college years. It was really the first place that I tried out my own set of wings, so to speak, so it's always with great nostalgia that I come back here. So much has changed here in the last 15 years - as one might expect with a city as in perpetual motion as Iowa City is. It's funny to me that despite all the change, it still feels a bit like home. When we were getting ready to be serious about moving out of small town Iowa, we thought about moving back to Iowa City, but when we got right down to it, it had a "been there, done that" feeling to it. And truthfully, I think the reason that I love Iowa City so much is because I don't have to live here. Whenever you move someplace and get sucked up in the local politics (to whichever degree you choose to get sucked up), the bloom does tend to fall off the rose. So that is why Iowa City is so rosy to me. Plus the traffic here is just insane. I don't think that the roads here were ever designed to hold the number of cars that they do.

So I'm here tonight and as I walked through the Ped Mall, I saw all sorts of people - many former versions of me, but mostly, since it's Thursday night, the streets are full of college students headed to the bars, which was never me to any great degree. I mean, I went to the bars when I was in college - usually begrudgingly - but I did go. I think that if I have one regret in my life it's that I spent so much of it being unhappy. Dear heavens, what a chore I must have been to be around! - which is not to imply that I am not a chore to be around now from time to time. I guess that's all the more reason to not waste any more time and do more things like get earrings and straighten my hair and search out new and interesting people in all sorts of unexpected places.

Being in the Java House is always so comforting, because for as much as it has changed, it really has stayed the same by and large. It is a place where I learned to drink coffee outside of the black type. I spent a lot of time people watching here, wondering what people's stories were. Even tonight, I find myself doing that, even though the world here is so different than it was in 1995. People gab endlessly on cell phones and nearly every one here has a laptop. That was so decidedly not the case then. I was not able to bring 2100 songs in my pocket back then - mostly I was relegated to bringing my CD Walkman and hoping that I got a seat by an outlet. Now, who cares? Every seat's a good seat.

Every record store that was in downtown Iowa City is now defunct except for Record Collector, which is too bad. I bought so many Madonna bootlegs in this neighborhood! But now, the internet has rendered that obsolete (so much the better, now they're free.) The place where Heidi and I had our first date and where we eventually became engaged is now an upscale hoity-toity restaurant instead of being the Great Midwestern Ice Cream Shop. The public library where I spent so much time (and where I first heard "Walking on Broken Glass" believe it or not) does not even resemble the place that I haunted with such delight. They have a gorgeous new facility that I swear is at least 3 times as big as it was before. We left this area just before it opened, which was good. For honestly, that is not my public library, even though it beats the socks off of Ames' library. I even went in there tonight and while I felt a pang of what once was, mostly, it is a part of me that has moved on.

And I do miss the old fountain in the Ped Mall - affectionately called the "Three Ladies Peeing" (I can't wait to see what typing that does for blog hits.) Witness: 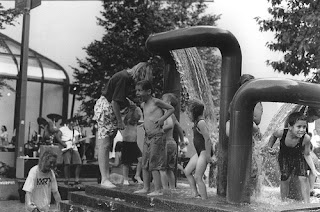 I know, I'm in deep here. I'll wrap it up here soon, mostly because I have to get back to the hotel and plug the computer back in, as well as my iPod.

I know what you mean about these nostalgic places. As long as you can go back and not think "ooh things were better then" (which I often do), then it's very nice!