A monster by any other name

As was noted in a previous post, I was nearing the end of Relic and was, consequently very eager to see the movie. Relic the book is a taut, well written, well paced sci-fi/horror thriller that leaves you wondering until the very last page about everything. After viewing Relic the movie (which arrived from Netflix on Friday), I wish I could say the same about the movie.

I was already more than ready for my expectations to be dashed, but I did not expect them to be dashed as they were. Multiple characters that were essential to the story were written out completely or merged into one amalgam of a character. Conflicts that moved the story forward in the novel were excised to make room for other, less important, plot lines. And that doesn't even begin to address the great issue I took with their depiction of Mbwun, aka the Museum Beast, He Who Walks on All Fours.

Mbwun was the monster that was lurking in the subbasement of the museum - but in the movie, probably because they couldn't figure out how to pronounce the name Mbwun, they felt the need to change the name of the monster to the Kothoga, which, in the novel, was the name of the ancient Brazilian tribe that alternately worshiped and feared Mbwun. The book makes it very clear that Mbwun has a reptilian component, but also (for reasons that become very clear later in the story) a large simian component as well.

Apparently, the makers of the movie did NOT read the book, or at least, chose to disregard that portion of the book, because I felt that the creature was entirely too reptilian and not nearly simian enough for me. Here's a couple pictures of the Mbwun Kothoga (sorry) from the movie, one a close up of the face, another, a model based on what the monster looked like in the movie: 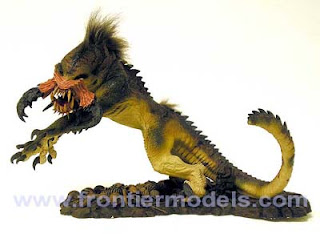 The only thing that I would call "simian" about this monster is the presence of hair. Apart from that, it looks kind of like a cross between the Predator and a lizard, along with a bit of Alien (Lord knows that the thing was slobbery enough to be related to the Alien.)

I had a much different view of the monster in my mind, although I will admit that they got the back half of Mbwun right in my mind. It's just that I expected something a little bit more like the monster in that Creepshow episode "The Crate" - something like this. 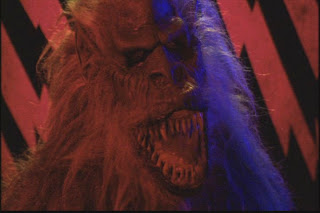 (Holy God, did that thing scare the crap out of me as a kid or what? Although I think the thought of being married to Adrienne Barbeau's character in that segment was only slightly less frightening.)

That would have captured the simian aspect of it MUCH better than the makers of Relic the movie did.

Finally, I did find a fan's conception of Mbwun while I was reading the book, which I think might have colored my mental image a bit. Probably a bit more simian than reptilian, but hey, you can't win 'em all! 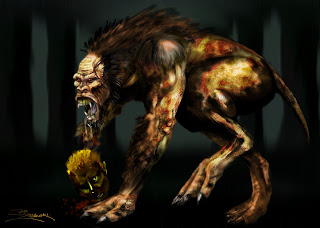 So anyway, I will try to purge the movie version of Mbwun from my mind once I decide to pick up the sequel to Relic called Reliquary.

One thing I will say for the movie though - the exterior shots of the museum (Field Museum in Chicago) and the city skylines just made me want to go to Chicago again - and soon!

I agree with you on many things about the book and the movie. But what I like about this creature in the movie is that it is just plane out grotesck and vicous. The book was alot better but I still think they did a good job making it into a movie. There are way worse books made into movies.

I think your last, simian influenced version of Mbwun was the most accurate. The beast is described as having a flat primate face, which allowed Pendergast to finally kill it by shooting it directly into the eye socket. Great concept illustration. Pretty much just how I thought the mbwun should look, as I read the book.