Got a highway to the sky

I'm on the mend and headed back to work tomorrow (90% sure of that.) It's truly amazing how when you're sick you feel as if this will most certainly be the illness that you expire from - or maybe that's just how I feel. In any event, I feel much better. I got some codeine cough syrup from work today and let me tell you, that stuff tastes so nasty there isn't anyone going to be getting hooked on codeine with that as the vehicle.

So tonight Heidi ditched us and went to see Stardust at the dollar theater (for 50 cents. FIFTY CENTS!) and while she was out, she swung by the Salvation Army store in search of a white sheet that she could dye to make a curtain for her office closet. She didn't find any sheets, but she did find another treasure - again at the rock-bottom price of 99 cents.

She found a vinyl copy of Streisand's 1980 album Guilty! 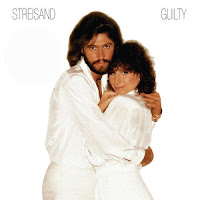 I know that it's not a rare album by any stretch of the imagination, but it has been too long since I listened to Guilty. Guilty has been all over my periphery these days, but mostly because of the fantastic song "Guilty" by De Souza & Shena. (hat tip to XO) No, it's not a cover of the Babs and Barry Gibb classic - even better. It's built on a sample of the album's final track "Make It Like A Memory" which always struck me as being a mish mash song full of disparate styles. Part power ballad, part disco stomper (well, the last minute or so anyway.) Anyway, do yourself a favor and check it out. It's on iTunes.

But back to Guilty. I remember being distinctly underwhelmed by it when I first heard it. For all the ragging I do on albums that are too long, this one is too short! Only 9 songs - give me a break. But I've since warmed up to it and truly, it's one of Barbra's best pop albums. She didn't make another pop record this good until 2005 when she did Guilty Pleasures, not surprisingly with Barry Gibb again. (I wrote about it here.)

So consequently, I had to import Guilty into iTunes so that I could load it on my iPod. And it's been playing ever since. And while I'm not usually one to go for remasters, the sound quality of this CD is pretty poor, so I may have to think about springing for the remastered version sometime.

I will most certainly stop talking about Barbra now for at least a little bit.

or more importantly, my joint fave movie of the year for 50 cents!!!!!

If you stop talking about Babs, I'll wonder if it's still you.

Paul, you liked Stardust? Did you read the book? I liked both for different reasons. If you held a gun to my head and made me choose, I'd pick the book, but the movie was such fun that I really would rather have both.

I think you'll enjoy this post. :-) we are scarily alike!