I've been delinquent in blogging, and I had such a good January! Oh well, I guess it's back to reality as they would say after the opposite sketches on You Can't Do That on Television. I worked this weekend but have tomorrow off so I am really hoping to sleep in. Getting out of bed has been a real feat these days.

One thing I must say though, I have been in a HUGE Kylie mode these days. I'm sure it has nothing to do with the fact that the reality of actually going to see her live is just starting to sink in. And in such a small venue! And with such close seats! Yeah, it's a 13 hour drive, but who cares? WE'RE GOING TO KYLIE! Whenever the day starts to go south, I just think WE'RE GOING TO KYLIE and almost immediately, things look better. Much like St. Patrick's Day, it's a ready-made excuse to be happy. 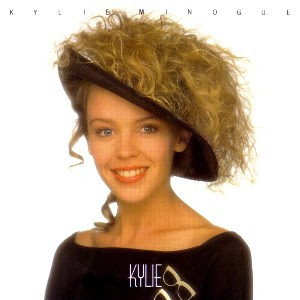 I was getting ready to take off for work yesterday and realized that, to my great dismay, I didn't have the entirety of Kylie's first CD on my iPod. Kylie was among the first 10 CDs I purchased back in late 1988/early 1989 and I purchased it on the strength of two songs, her ubiquitous cover of "The Loco-Motion" (which, oddly enough, was the last vinyl 45 I purchased) and "I Should Be So Lucky" which was a much smaller hit in the U.S. but was one of my favorite songs of the summer of 1988. I was actually quite surprised to see that it was a U.S. Top 40 hit for Kylie which is something that has pretty much eluded her for the vast majority of her career.

I'm pretty sure that the first time I heard "I Should Be So Lucky" was when I saw the video for it on Night Tracks. It was cheesy female pop so how could I resist it? But who was this woman singing this song? And how the hell did you say her name? Well, with an earworm of a chorus such as the one found in "I Should Be So Lucky," it really didn't matter. I remember calling up the local radio station and asking them to play it (I had heard them play it once before.) They did and I still recall the DJ butchering her name, calling her something like Kee-lay Minogue. Once "The Loco-Motion" became a hit, DJs were forced to pronounce her name right.

Kylie is a bit of a mixed bag. On the one hand, it's got some great singles. But man, the filler is FILLER. It's a Stock-Aitken-Waterman production so consequently, a lot of it kind of blends together. Many of the songs have aged very badly, partially due to the production and partially because they are some of the cheesiest songs you'll ever hear. "It's No Secret" is one song that I feel has especially not stood the test of time although I remember liking it a lot at the time. Most of the songs I enjoy kind of in spite of myself. For example, the song "Love At First Sight" is cute in a late 80s way, but let me count the ways in which the 2001 version from Fever is superior. Mostly though, it's throwaway pop.

It was the last Kylie album I would buy for 12 years. She completely and utterly fell off my radar after that song and then her albums weren't even given US releases. At the dawn of the mp3 revolution, I remember downloading a couple tracks from Light Years off the internet, but it wasn't until "Can't Get You Out Of My Head" took the planet by storm that I picked up Fever and I've purchased pretty much everything since as well as going back and acquainting myself with the stuff I missed, assimilating it into my life's soundtrack. In many ways, it's been kind of fun to have a roundabout fandom, one that started out on the ground floor but then disappeared, only to come roaring back over a decade later.

But as songs from the debut album goes, not much touches the glorious cheese of "Got To Be Certain." I really REALLY hope she sings this live on the tour. And with Kylie, you never know. Unlike Madonna, there seem to be no "off limits" songs and I adore how she embraces her back catalog with such enthusiasm, as if she really does realize that people come to shows to hear songs they know. Not that being Aphrodite heavy will be a bad thing, but I can pretty much guarantee we'll hear a crapload of Kylie classics.

I love this video so much. It's so cheesy but Kylie looks good in the black dress. There are apparently four different edits of this video and the one I always remembered was the one with Kylie on the merry-go-round at the beginning of the bridge. It took me a while, but I finally found it on YouTube. It starts at about 1:56.

I'm actually hoping she does "It's No Secret," if for no other reason than it's the only single that was a hit in the US and nowhere else. http://www.youtube.com/watch?v=JHI9Og8af5A

See, now that's a bit of knowledge that I didn't have. Maybe I'm being too hard on that song.

Honestly, I don't really care what she sings. The show promises to be fan-fucking-tastic.

forever our aussie girl!
enjoy the show1, but of course you will!
"got to be certain" is ace!
"confide in me" is epic!

Oh, man. I was in Australia when Kylie-mania hit, when she was still on the soap opera. You might feel differently about her if you COULD NOT escape her songs during the SAW period.

Oh well. I may never come to appreciate the genius of Stock-Aitken-Waterman, but I definitely like her newer stuff.