An impressive instant - ten years on 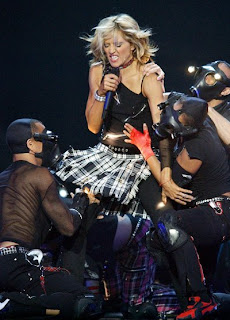 Ten years ago tonight, at the time I'm writing this very blog post, I had my first audience with The Queen, otherwise known as her Madgesty, Madonna. August 29th, 2001 was the night I attended the Drowned World Tour at the United Center in Chicago. I went with my good friend and accomplice in all things Madonna related, Jeff. Heidi went along too, but she didn't go to the concert. At the time, she was almost 7 months pregnant and, on the advice of our doctor, she sat the concert out.

I remember it like it was yesterday. We started calling in to Ticketmaster (who the hell does that anymore?) about 30 minutes prior to the on sale time. You hoped and prayed that you remained on hold until after the tickets went on sale, but not too long so that you didn't miss your shot at good seats. Heidi was on our cell phone, I was on our landline, and Jeff, living in Williamsburg at the time was on his phone. We all were trying to get tickets and the instant that someone got through, the others were to stop trying. The fact that I was the one that ultimately got through to Ticketmaster (after having connected 5 freaking minutes before the on sale time...back to the queue for me) was fortunate because I'm not sure how Jeff, who lived alone at the time, would have been able to call us and stay on the phone with Ticketmaster. In any event, I got through and amazingly, I got tickets.

We got seats in section 332. I don't remember the row number, but here's a map of the arena, which I amazingly and not surprisingly still have saved on my computer. Here it is.

Check out the prices of those seats! I remember blanching at the thought of spending $85 for a concert ticket and could not even fathom spending $250 even if I could have gotten one of those rock-star floor seats. Clearly, I didn't remember that 5 years later when I spent $265 for my Confessions Tour ticket in Las Vegas.

I took a couple days off work and we drove to Chicago. Since Heidi wasn't going to the concert, she got to pick the hotel. She chose the downtown Marriott. It ended up being okay because it was a pretty quick cab ride from there to the United Center. I had been regaled with stories of what a terrible part of town the United Center is in (it is kind of a scary part of town, as I was reminded in 2009 when we saw Sticky & Sweet there) The show had been broadcast on HBO the a couple of nights before and Jeff had taped it but not watched it. I was on total tour blackout - I knew next to nothing about it, not even the opening number. It was fairly easy in those days to avoid tour spoilers. Nowadays, I've totally given up and do just about everything but watch crappy fan shot video of tour and download audience recordings before seeing the show myself. Anyway, Jeff had brought the VHS tape of the tour with him and the idea was that Heidi would watch the show while we were at it. Only problem was the room didn't have a VCR. We walked all over downtown Chicago trying to rent a VCR, only to end up in a slightly frightening part of town, at which point we gave up. I don't think Heidi cared enough for us to have gone to all that effort, but she was a good sport, especially as she walked around downtown Chicago on a hot late summer day, pregnant and uncomfortable.

We hit Pizzeria Uno prior to the concert. I found these pictures which really blew my mind when I saw them. We were babies!! 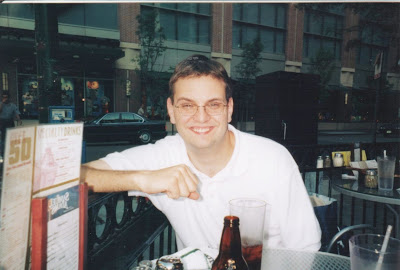 Me, squinting into the sun or something with apparently rimless glasses. 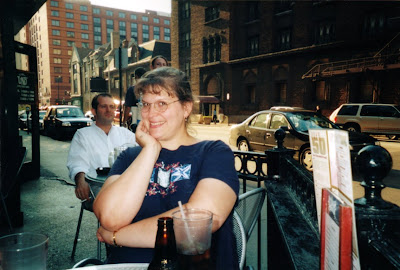 Heidi is the only one drinking pop. 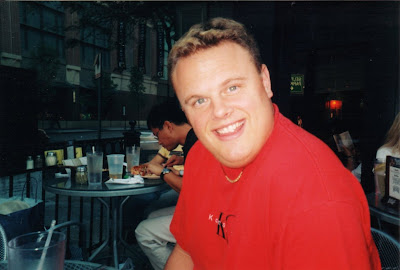 Jeff doing what he does best - being Jeff.

Heidi rode with us in the cab down to the show and dropped us off, then headed back to the hotel. We found our seats and, as I'm so fond of saying when I tell this story, there was nothing above us but ceiling. Seriously, we were as far away as you can get from the stage without being behind it. No matter though, we were in the arena!! We sat next to a nice couple from Chicago that were not real huge Madonna fans but the fact that she hadn't toured in so long drew them both in. They hadn't purchased the last couple albums but knew enough that they thought they'd enjoy it.

I bet they left wishing they'd have purchased those albums. The Drowned World Tour was many things. A hit parade it was not. There were only two bona-fide 80s hits performed on that tour - "Holiday" and "La Isla Bonita." The rest were primarily tracks from Ray of Light and Music. And many MANY album tracks at that. This was not a show for the casual fan, at least from a song selection standpoint. Sure we got some great recent hits - notably "Frozen," "Ray of Light," and, to my great delight, "Secret." But we also got the self-indulgent Madonna track "Mer Girl" not once but twice and the autotune mess of "Nobody's Perfect." She was also a bit cold with the audience, as if she was annoyed to be performing. None of that bothered us at the time because we were finally at a Madonna concert!

The crowd really came to live when the familiar keyboards of "Holiday" started. It's still my favorite performance of this old warhorse of a song. I love Donna's introduction - "you know they try to imitate her but they just can't duplicate her!" And the "I say pimp! You say ho! Pimp! Ho! Pimp! Ho!"

In the end, it was a good thing that Heidi didn't come with us. When we left the show, there wasn't a taxi to be found so we really had no way back to the hotel. So no problem, we called her at the hotel and she came down to the United Center in a cab to pick us up. This is notable because the cabbie, upon hearing that her husband was at a Madonna concert with his male friend, was apparently convinced that I had to work through my unacknowledged homosexuality, since obviously that's the only reason I would go to a Madonna concert with another guy. Whatever. We all got a good laugh out of it and it was just another in a long list of hilarious things that have happened on trips to see Madonna. That said, the gay guy contingent at every Madonna concert is, as you might expect, very heavy but not nearly as heavy as at the Kylie show. That show took the gay cake.

I would be remiss if I didn't mention our little trip to the Museum of Science & Industry the next day, where we re-enacted scenes from Superman II. 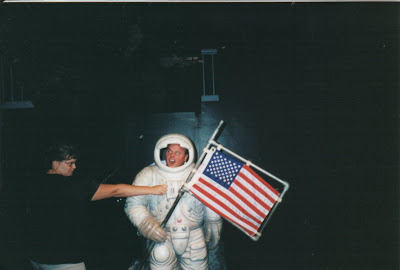 Heidi as Ursa and Jeff as the hapless astronaut. "I tore it like paper!" 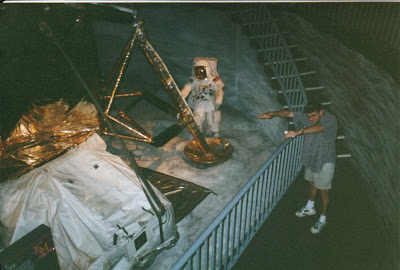 Me doing my best General Zod.

We've seen Madonna three other times since - The Re-Invention Tour which found us jetting to Washington D.C., The Confessions Tour for which we traveled to Las Vegas and back in less than 24 hours (never again.) For the Sticky & Sweet Tour, we were back at the United Center in much better seats. We waved at the people in our Drowned World seats which were probably twice the price by the time Sticky & Sweet rolled around. And you can bet I'll be there with bells on again. Her live shows are never disappointing. Like pizza and sex, even when they're not so great, they're still better than most things.

And to the 10 years that have passed, why in the hell have you gone so damn quickly?

Complete jealousy over here, but loved reading every word of it nonetheless.