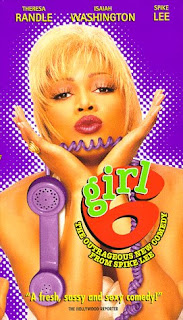 As I mentioned in a previous post, one of the movies that Heidi and I saw in the theater when we were first dating was the Spike Lee tribute to the phone sex industry, Girl 6. While Heidi was in London, I got this movie from Netflix and rewatched it - 11 years after we first watched it at the Coral IV theaters (which is now New Pioneer Co-Op) in a practically empty theater save the high school kids in the back two rows.

I remember it being quite good - and actually, on the rewatch, I was amazed at what I had forgotten. The basic outline of the story is that of Judy, an actress who unable to get work decides to lend her talents to a phone sex operation - a phone sex operation, I might add, that looks cleaner and better lit than I ever imagined a phone sex operation to be. While Judy excels at it and makes a lot of money off of "regular" callers, ultimately, it affects her more than she wanted it to and in ways she did not predict. Playing alongside the main story is the continuing saga of a little girl who fell down an elevator shaft in her building - which reminded me very much of the Coma Baby in Bright Lights, Big City in the way that it mirrored the path of the protagonist and served as a metaphor for her struggles.

Anyway, while the movie is good, mostly for the incredible 90s nostalgia (a phenomenon that I am only now starting to appreciate) that it exudes in nearly every frame, ultimately, it's not about much. I suppose it's more of a character study on Judy (who is "Girl 6" at the phone sex operation) than anything else, and I can appreciate that. However, when you compare it to some of Spike Lee's other work, it doesn't really pass muster. Theresa Randall is very good as Judy, and Spike Lee shows up as her best friend and next door neighbor with a serious addiction to sports memorabilia. And proving once again that Madonna is best in supporting and cameo roles, she briefly appears as the manager of a strip joint/phone sex operation that Judy interviews for. Madonna looks very severe and is both convincing and hilarious in the role - describing the sexual fetishes that the callers are into in graphic detail. It was worth rewatching for those two scenes alone.

Perhaps the best part of the movie was the soundtrack, which consisted exclusively of Prince and Prince-related songs. A couple of the tracks are new, most of them are previously released, but for whatever reason, they really fit the movie. I ordered the CD today from Amazon for a paltry 5 dollars (after it was not available for instant gratification on iTunes and I realized cobbling the soundtrack together from various Prince collections would be more costly!) There are several songs that were in the movie that are not on the soundtrack - mostly songs that I already have like "Sign O The Times" and "Nothing Compares 2 U" but no worries there are I'll probably just end up making a playlist and going from there.

Dan..bc here..funny you bring up the coral IV.. i remmeber when it closed and happen to be in the last movie they were showing that night...it was "the Big Hit" with mark wahlburg. There was another one called "The perfect Murder" but it had micheal douglas and ms paltrow in it and i didnt want to fall asleep..they were giving out free popcorn but not free pop..i thought this silly since to me a fire sale is a fire sale..that brings back memories..