...or, that's how we're referring to the blah that has overtaken us in the last couple weeks. It seems very appropriate, although naming it does little for figuring out what to actually DO about it. I think that it will help me to say it out loud, for all the internets to hear: I will not retire in Iowa. I will likely not even work the remaining years of my "working years" in Iowa. I know that screws up my retirement (currently counting on the state run IPERS program more than anyone can even imagine) but you know, you can't live your life waiting for retirement. At least I can't. If other people are content to do that, bully for them, but I just can't.

This is a time of transition for us but mostly in terms of parenting. With Anna going off to school, we enter a new phase of her development (and I kind of outlined my nervousness about that in the last post) but other than that, there does not seem to be much other transition. As a video from my youth would say: Birth, school, work, death. But God help me if that will be my lot.

I know, I talk big and rarely follow through. That's a problem. I don't know what to do about that. It's like I wake up and then, almost immediately, fall back to sleep, lulled by the trappings of whatever in the world is singing the lullaby. It's been difficult (this week especially, when I feel like I'm still recovering from the overnights I worked) to try to stay conscious, to listen and to be alert for things.

One thing that I did do that was very New Year's Resolution for me (i.e. be braver!) was I called up a friend of mine the other night to whom I had never actually spoken before and had quite a wonderful chat. I admit, Heidi dared me to do it, but I still think it counts.

Anyway, back to the creeping ennui. It is like a vine that just grabs you and sucks all your passion for living right out of you. I'm not talking about physical "life" but the act of living. It makes it hard for me to get excited about much of anything - even the new Madonna leak has been a bit of a blah event (it helps not one bit that even though the song is not horrific, it confirms a lot of my worst fears of her working with Timbaland and Pharrell.)

It seems like, as Darren Hayes would say, the great big disconnect. And this is, of course, nothing new and similar to the previous post where I imagined people groaning over me obsessing about sending Anna to kindergarten, I can hear similar tsks screaming "ohnonotthisagain!" Well, it's my effing blog, so lay off.

At any rate, I think I've blathered on enough - but the concept of the creeping ennui reminded me of a feature I read in MAD Magazine as a kid - "Horror Films Based On Real Disasters" (or something like that. I'll leave you with a sampling - I think The Creeping Ennui would definitely make an updated feature. 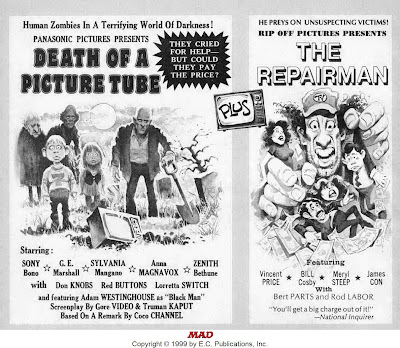 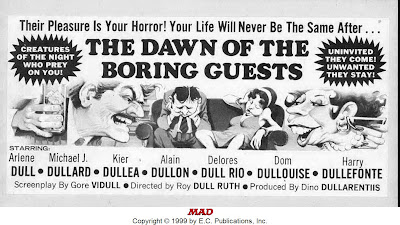 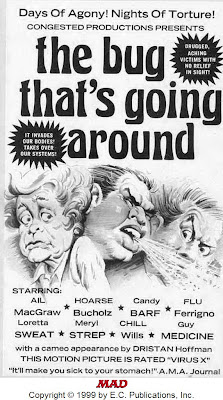