OK, so yesterday, I drove over to Cedar Rapids to pick up Anna. It was my wife's grandmother's birthday and my mother-in-law was planning on going there and I thought "sure--why not? Cedar Rapids is only a 2 hour drive." The problem is that it's a 2 hour drive on some of the worst roads that Iowa has to offer. That may be a bit of an overexaggeration, as I'm sure there are some level B service roads that are worse, but Highway 30 from Ames to CR is just one of the most aggravating roads to drive. For one thing, it alternates between being 4-lane (2 lanes of east and west bound traffic) and 2-lane (1 lane of each) so consequently, the speed limit varies between 55 and 65 mph. You're constantly having to adjust your speed upward and downward. And on those 2-lane stretches, it is nearly impossible to pass - something that you usually want to do because you're behind someone going 10 miles an hour under the speed limit.

The other bad thing about that road is that it may as well be one giant deer crossing. I'm of the opinion that the whole state of Iowa should just be marked as a deer crossing, thus saving us the expense of having to post those deer crossing signs every 5 miles or so on every road in the state. It does not help that Highway 30 between Ames and Cedar Rapids was where I hit a deer just under 2 years ago. Because of this, I am hyper alert for deer and last night, when I was driving home, I was just too tired to be that aware.

Anyway, I'm happy to report that the drive there and back was without incident. Anna was very sad to leave her grandmother - Grandma Julie had so many activities planned that it was bound to be a disappointment to be going home with dear old dad. She must have been exhausted because she slept nearly the whole way home (which meant she was still awake at 11PM last night.)

The BEST part about the drive was that I set the old iPod on shuffle and just went with it. My iPod is chock full of playlists for every occasion, but I was seriously in the mood for some randomness. There were some songs I skipped past if I wasn't in the mood for them, but take a look at what was played on that road trip. (notice the time stamps: last song played is listed first.) 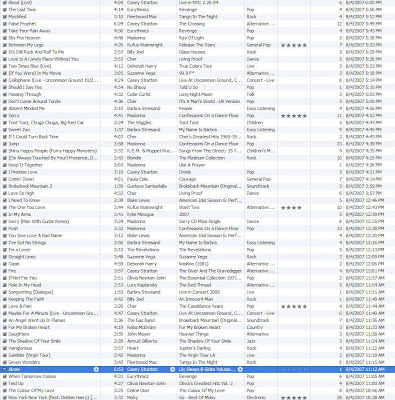 (click image to enlarge)
There's a stretch of time between 4:35PM and 4:52PM that Anna requested I play the playlist "Anna's Favorites" - hence the "Furry Happy Monsters" and "Toot Toot Chugga Chugga Big Red Car" (but notice that "If I Could Turn Back Time" and "Sorry" are both on that list too!) Other than that, it was random craziness from a pool of around 1400 songs.