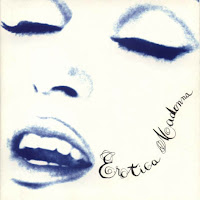 Erotica is perhaps the pentultimate fall album for me. And that's saying a lot as there are a lot of them (as you'll all be exposed to in the coming weeks.) I cannot talk about fall music without mentioning Erotica. It is the unlikely sister album to Simply Streisand. Both evoke such strong memories of my first year of pharmacy school that it is simply impossible to listen to either of them without thinking about that time.

I did a quick search of the blog to see which of the stories of Erotica I have told. I have told most of them. I've told of my disilluionment with Madonna around the time of Erotica, how I did not purchase it on the first day of release, how I didn't really like "Erotica" the song, but eventually, I relented and purchased it on the Friday after its release. It is, quite simply, Madonna at her best. It was always my favorite Madonna record - nothing ever came close until Confessions on a Dance Floor was released. But even having said that, I love Confessions for entirely different reasons. While Confessions was a calculated move aimed at the dance floor, Erotica was Madonna being a mess and self indulgent and being fucking amazing at it.

Despite being such a favored Madge album, Erotica is so far from a perfect album it's not even funny. For one thing, it is entirely too long. I would excise "In This Life" (sorry Madonna, the sentiment was good but the execution completely awful) and "Thief of Hearts" (sorry Heidi, I like it but I don't think it fits.) I would also jettison "Did You Do It?" which is the biggest waste of a CD bonus track ever. I would take some of the strong songs from the first half of the album and put them in the last half to bulk it up. Honestly, the album really falls apart after "Rain" with only "Secret Garden" coming close to the brilliance of the first 7 songs. 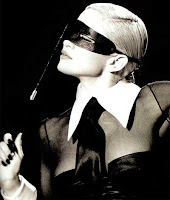 topped the uncommercial aspect with American Life in my opinion.) Gone was the little twentysomething girl singing about how she was going to be true blue to her man. There was no more singing about living in a material world. It was even a step away and to the side of the confessional nature of Like A Prayer. It was a natural progression from "Justify My Love" - here is Madonna finally being as scandalous as they had always accused her of being. Boy Wonder with whips and chains. Except that Boy Wonder was actually Girl Wonder. I missed the "happy" Madonna of the 80s when this album first came out. It took me a while to warm up to this woman who, while sexual, was oddly stripped of sexuality.

This was also the point where Madonna really began to falter. "Erotica" the single failed to go number one, and "Deeper & Deeper" - a song that really should be up there with "Vogue" and "Express Yourself" in terms of popularity with casual fans - barely scratched the top 10. The next two singles didn't do much of anything at all, although we got a fab video for "Bad Girl" in the process. In the end, I don't think people were ready for Erotica, even though it was what they had been accusing her of doing since she came on the scene.

But for me, the album contains what I consider to be two of Madonna's best album tracks in "Waiting" (where she brilliantly samples herself) and "Words." Both are kiss off songs - with "Waiting" continuing very much in the vein of the speak-sing that Madonna was doing at the time, but is a strong song structurally and musically. "Words" is more of a straight forward song with a bunch of classic Madonna talking at the end over an old typewriter clicking and dinging all over the place. Great stuff.

I know Madonna doesn't go back, but I can't help but wonder what she would get today with Shep Pettibone and Andre Betts, the producers of the album. Almost certainly, it would be better than the drivel that's coming from her camp now.

The next time you want pussy, just look in the mirror baby.

(For a really interesting look at the recording of Erotica from the POV of Shep Pettibone, check out The Erotica Diaries here.)
Posted by Dan at 9/21/2007 08:47:00 PM

Erotica is most def M at her best

Oi, I love the album, I still listen to it without skipping any song ;) Brilliant :D