One of the stops that we always make on every trip to Chicago is Gaymart Chicago. The name is actually a bit misleading because, while it does have a lot of Pride merchandise and greeting cards with men in their birthday suits for sale, it also has a TON of pop culture items that I have not been able to find anywhere else. They have a shitload of Doctor Who merchandise that usually you would otherwise end up buying online (I could have bought my Sonic Screwdriver there rather than ordering it from Amazon Sellers) as well as other stuff that frequently borders on the kitschy side of pop culture.

However, I did come across this little wonder, and at 5 bucks, the price was right. It is a Bib Fortuna coffee mug! 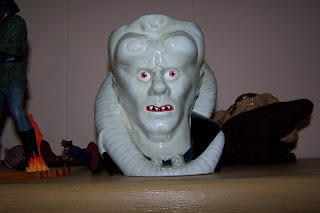 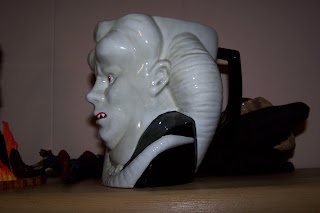 (Bib's intergalactic mug shot - no pun intended)
It was actually mislabeled as an Emporer Palpatine mug, if you can believe that. 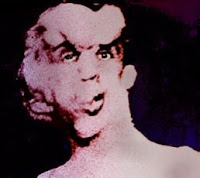 Anyway, the more I look at it, the more I think that the character of Bib Fortuna must have been inspired (at least a little bit) by Joseph Merrick, probably better known as The Elephant Man. Talk about a story that I was obsessed with when I was a kid. I watched the movie The Elephant Man more times than I can count as a kid. I read the book several times. But more than that, I remember the documentary Some Call Them Freaks that ran over and over again on HBO (and that we probably taped back on the VCR my father used to bring home from school over the summer.) It was narrated by Richard Kiley and featured Robert Wadlow, Robert Earl Hughes, Chang & Eng Bunker and Tom Thumb among others. It rode the line between amazing and a little too scary, but it just kept me coming back for more.

Anyway, here's probably the most famous scene from The Elephant Man. I had completely forgotten about it.

Doctor Who stuff at Gaymart? I had NO idea. Must check that out next time I'm in Chicago!

Hi Dan,
I think it was John Merick, wasn't it? Anyway, The Elephant Man is a favorite of mine as well and I think Lynch's best, next to Eraserhead.

John - There is an entire wall of Doctor Who stuff. I very nearly got the Dalek alarm clock.

V - I thought that too, but apparently, it is Joseph. I remembered it being John, but then when I went to Wikipedia, they mentioned that his name being John was a mistake that kept on getting repeated.

Thanks for clearing that up. I kept remembering the movie and thinking back, I do remember reading about the name being Joseph. Didn't stick with me I guess. Age. :)