Blogging has proven rather difficult in the last week or so. Actually, I have had a hard time with it for several weeks now. I'm not sure what's going on, other than the fact that real life has been much more demanding of my time. While I enjoy coming to this space and putting my thoughts on random stuff up, it is trumped by work and helping Anna with her homework (in 1st grade!) and spending time with my wife, even when the time is spent watching The Lair via Netflix. Let's just say that Queer as Folk it is not. The best quote I saw regarding the series is "this is what happens when porn stars try to act." I would agree wholeheartedly, with an emphasis on the word try. 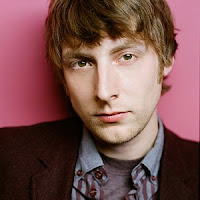 This week has been kind of a whirlwind of activity, most of it good, but still, it has been exhausting. It has, first and foremost, been a week of free concerts. Monday night, I went with our friend Jess to see Eric Hutchinson at People's Court in Des Moines. Jess and Heidi had seen Eric perform earlier this summer when he was the opening act for Missy Higgins. Ultimately, Heidi ended up liking his performance better than Missy Higgins and knew that I would probably like him as well. She was right and I picked up his CD not long after hearing a few samples online. I even blogged about him, so impressed was I with his CD. So when I saw he was coming to Des Moines again, I thought, hey, that could be fun. The only trouble was that it fell right at the beginning of what I knew (even then) might not be the best week. And then when my parents bought tickets to Dolly Parton (more on that later) for Wednesday of that same week, I decided I wouldn't go.

Then Jess won tickets, CDs and backstage passes and offered one of them to me. How could I say no? I had never really been to a meet-and-greet before (the only real time I've ever met someone I am a fan of is when I got the chance to talk to Casey Stratton after his Chicago show) and I am afraid that they are mostly just awkward. You get in there and you realize that you are meeting...another human being. Don't get me wrong, he was gracious and funny and a pretty cool guy. He signed our CDs and T-shirts and pretty much anything else you had. But it was a bit of an anticlimax. Perhaps if I were an uber fan (or a Hutch-head as they refer to themselves) it might have been different. But mostly, it was like meeting someone at church for the first time, only they signed a CD instead of bringing a dish to pass.

The concert itself was quite good. Hutchinson is a very energetic performer and it is clear that he loves what he does. He played every last song from Sounds Like This (a fact I didn't realize until I got home that night) as well as a few from his indie days. But as usual, the highlight of the whole show was his Cher-ification of his song "It Hasn't Been Long Enough." I videoed the whole thing. Get out your glowsticks, bitches!

He does this very frequently (making it the Eric Hutchinson equivalent to Dolly Parton saying "it costs a lot of money to make someone look this cheap") but I can watch it over and over again. My favorite part is the Cher-ish vocal. It is so dead on!

The thing about the show that I could have definitely lived without was the frat boy contingent (and the frat boys-in-waiting.) Jess and I commented that it was funny to watch all these frat boys sing every word to the songs when basically, Eric's work is sophisticated boy-pop (not a slam in the slightest) and that does not fit in well with the stuff that you would expect them to listen to. It made me appreciate even more than I already do the gay guy contingent that seems to be present at pretty much every concert I go to. That population has always been much more welcoming to me than the frat boys.

The concert was fun, but I am too old to get back home at midnight and then be up at 5:15 the next morning, which is exactly what I had to do. But we did get this picture at the meet and greet and I think I look pretty dang good in this picture if I do say so myself! 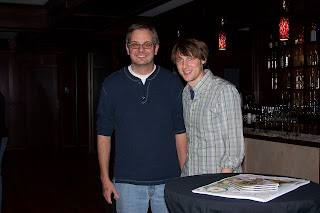 That clip was a blast! The guy's got a great sense of humor, along with a good voice. Must check out CD...