Do you believe we can change the future? 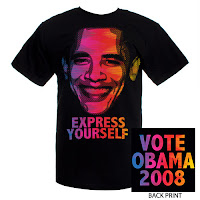 I'm sure it is no shock to anyone that I have cast my vote proudly for Barack Obama. I am hoping for an overwhelming victory tomorrow night, one that can be a true repudiation of the last 8 years and of McCain's truly deplorable campaign of fear, slime and lies. There was a time that I could have supported John McCain. In 2000, he was the obvious better choice. He was independent then, he had a soul. Now, he has proven himself willing to do anything ANYTHING to win the presidency. And that, I'm here to tell you, is one of the reasons to deny him the presidency.

In 2004, my Kerry vote was more of an anti-Bush vote. I was always Dean person even though many thought he would have been an even worse candidate than Kerry ended up being. I voted for Kerry because I believed that the country really couldn't take 4 more years of Bush. I sat and watched not only Bush's re-election but also my own state go red by the narrowest of margins. Looking back on this day in 2004, we were totally kidding ourselves hoping for a Kerry victory. But this is not 2004. And tomorrow night, barring anything unforseen or vote tampering or polls so out of whack with what people are actually doing, we will be seeing Obama's acceptance speech and McCain's concession speech.

Janeane Garofalo famously said "At this point, anyone who votes Republican has a major character flaw." I don't know that I'd go as far as to say that. I know some conservatives who really do make sense. However, those conservatives haven't been taken over by the far-right fringe of the party, the portion of the party referring to Obama as "the terrorists' candidate." However, I would strongly encourage anyone voting for McCain/Palin tomorrow to reconsider and think about the future of the country as a whole, rather than just your pocketbook or your sphere of control. I have been frequently criticized for having my little heart bleed all over the floor, but really, for all those supposed Christians that would say otherwise, we are our brother's keeper.

Do I think Obama will come in and magically sweep away the last 8 years and we will be in a nirvana? Heavens, no. And I think a lot of people on the left are going to be mighty disappointed when they find out that Obama is not going to be able to do all he has promised. But the thing to bear in mind will be, would we have fared any better under McCain? I think the answer to that question is likely not.

Who knows, in 4 years, I may regret my vote much like many regretted their vote for Bush. But I have to live in this moment and at this moment, it is time for a change.

Dean has been vindicated over the last 4 years. His "50 state strategy" that many thought was too ambitious laid the groundwork for the map shake-up that Obama is going to pull off tomorrow night.

We both voted on 10/20 - the first day of early voting in Texas. Today I'll be nervously avoiding any work, while proudly walking around with my "That One '08" t-shirt. And tonight we'll be gathered with friends at our house watching the returns...

What a joyous day!!