I just got back from what is probably the second best time I have ever had dancing - the best time being a tie between my wedding (which involved me drinking an entire bottle of wine and famously DJing my own wedding dance) and our trip to the Garden for Heidi's birthday (one of my most favorite posts on this blog if I may be so bold and conceited).

Tonight was the Daddy-Daughter dance at Anna's school. Attending it required some creative scheduling at work, but it was totally worth it. I knew that it would be, but I had no idea that I would have as much fun as we did. Put on by the Meeker PTO which is trying to raise money for new playground equipment, it was well organized, well attended and a total blast, even if it did take its name from that gag-o-rific "Butterfly Kisses" song. Held in the gym at Anna's elementary school, it brought back memories of school dances I attended 20 years ago. The girls were dressed to the nines and most of the dads were all dressed pretty spiffily too. I wore a tie for the first time in forever as well as my cool New York suit coat.

We got there just after it started, and already the gym was full of dads and their daughters. At first, I was a little self conscious, as I normally am when we go anywhere to dance. I'm one of those guys that secretly (or not so secretly) just loves to dance, but has a hard time breaking through my initial layer of inhibitions. Usually, there's a little bit of alcohol involved in getting past them, but that was obviously not an option tonight. Ultimately, I decided it was just like the beach or the pool. I always think I am going to be the worst looking, most out-of-shape person there. I am always wrong, and really, no one is looking so you might as well just have fun.

And have fun we did. We danced to all sorts of stuff. They mixed it up quite nicely so that there was something for the kids ("High School Musical" was pretty prominent) as well as the oldsters like me, with some Cyndi Lauper and other 80s night staples thrown in for good measure. They played some surprises - Neil Diamond's "Sweet Caroline" and even a bit of Lady Gaga which has never sounded as good as it did tonight. It sounded so good, I actually downloaded "Just Dance" tonight after months and months of resisting it. Perhaps the oddest song played all night was "Rock and Roll All Night" by Kiss, which Anna knows from Guitar Hero. When I hear it, all I can think of is Role Models - rock and roll all night and part of every day.

Anna was hilarious tonight. She declared to me as we walked in the door "I put on extra deodorant, just in case." It was a good thing because the gym was kind of stinky by the end of the night. She was never quite able to decide if she wanted to be with me or with her friends. When we were dancing, it was hard to convince her that every song was not a chance for her to do a solo interpretive dance. But who am I to discourage? I just enjoyed being with her.

One of the most interesting aspects of the night was the wide array of fathers at the dance. We were all along the spectrum when it came to comfort level with being dancing fools. While I was probably somewhere in the high 70s/low 80s on the dancing fool scale (100 being the highest), there were some guys that cut the rug even more than me. Many were very stoic and did not really dance, which kind of begged the question why they were there at all. In the end, it was all about Anna, who just had a fantastic time, even though her shoes hurt her feet and her necklace, bracelet and scarf were in my pocket within the first hour.

When "Butterfly Kisses" was inevitably played at about the half way point, we had been having such a good time that I barely noticed. We danced around the floor a little bit, but what struck me is how little of a "Butterfly Kisses" relationship Anna and I have. Oh, sure we do in some respects - much of that is just what being the father to a daughter is. But our relationship is so much more than just the sappy stuff. It's about listening to the Guitar Hero playlist on my iPod (even though I was caught off guard for the "Dad, what does 'talk dirty to me' mean?" question). It is about watching Meerkat Manor on the Netflix box and playing the Titanic song as a piano duet. In fact, during the song, while most of the dads were doing the slow dance with their daughters, mine was off being the free spirit that she is, occasionally bouncing back to me to do a spin or a twirl. Hopefully, the way that I am parenting her is fostering that free spirit rather than squashing it.

For all the greatness that was the dance, I will say they totally blew the last song. It was Etta James' "At Last." If it had been me in charge of the music, it totally would have been Donna Summer's "Last Dance." Not to mention there would have been at least one Madonna song. There are some that are appropriate for kids! It is not a dance without either "Vogue" or "Into The Groove."

What a great night. On the way home, we couldn't stop talking about how much fun we had. It makes the coming weekend of work just that much more palatable. Because no matter what tomorrow deals me, tonight I am happy.

Here's some pictures of us before we left for the dance. 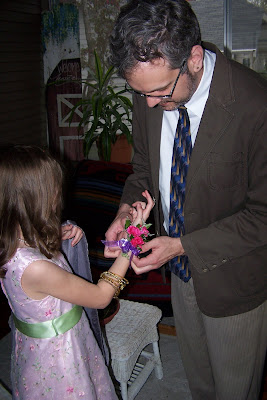 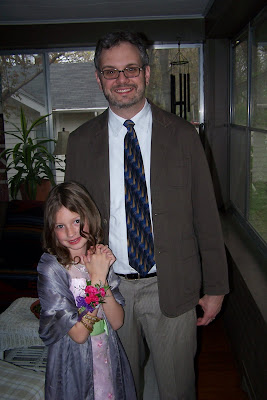 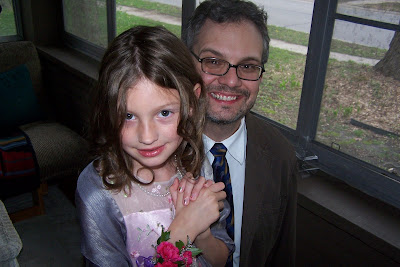 I love that you two went to this so much, and I'm glad you had an awesome time. :)

I rarely use this word in my actual life...but that's damn precious.

I know you consider yourself the fortunate one in the equation, but hopefully she'll remember stuff like this when she gets older. A lot of dads wouldn't even bother. Glad you had a good time.

You are both such good parents, you really are. And John is right, these are things that will really leap out to her when she is older.

Sweetness personified! :-) Thanks for sharing the story behind the photos...

The stuff of memories! You guys look awesome together.

And, I'm with you, Donna Summer would have been a much better "last dance".

Thanks to all who commented here. It was a great time and not something we're bound to forget anytime soon.

We should hold a dance here so you two can show off your moves! And def want to take you to Moun of Tunis - taking bets as to who gets up to dance first there ;-)