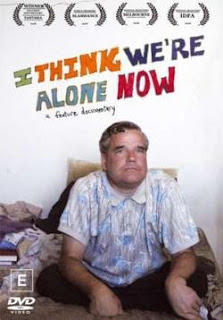 In an attempt to make folding laundry a little bit more palatable, I put on a documentary on Netflix Streaming called I Think We're Alone Now. This documentary had been recommended to me by my friend Rachel. When I realized that it was about a couple of very mentally disturbed people who were obsessed with late 80s teen pop star Tiffany, I immediately thought of the documentary For the Love of Dolly (see my post on that movie here.) At only 64 minutes long, I figured it was at least worth a shot.

The stars of the movie are Jeff Turner and Kelly McCormick. Turner is a 50-something year old man from Santa Cruz, CA with Asperger's syndrome and his obsession with Tiffany resulted in her getting a three-year restraining order on him in 1989. In my mind, that restraining order needs an extension. He gleefully shows off clippings of the incident and talks about how Tiffany is his "life-long friend." He goes to her concerts, writes her letters (many of which he shows have "refused - return to sender" written across them) and remembers the time when he kissed Tiffany. Inside his small apartment are countless bits of Tiffany memorabilia along with large amounts of other junk that looks makes it look like he just barely missed qualifying for Hoarders. Perhaps most bizarre amongst all this is a retro-fitted bicycle helmet he calls a "radionics machine" that he wears to "be in touch with Tiffany." Kelly McCormick of Denver, CO, an intersexed person who identifies as female, serves as an intense counterpoint to Turner's almost child-like glee when discussing their idol. Eventually the two meet in Las Vegas for a Tiffany concert.

As I was watching this film, I must say that I didn't have very many positive emotions. I was uncomfortable and at times, angry, but mostly, I was sad. Although both of these people would have me backing slowly away or trying to find the quickest escape route, I couldn't help but notice the absolute loneliness that both of them must feel. To be so isolated in our modern society must be very difficult to handle - it's no wonder they've channeled a lot of this negative emotion into an obsession with a former teen star. I don't think that either Turner or McCormick would hurt a fly, but I found their obsession a bit disturbing and it made me wonder why no one is helping them when clearly, they need some sort of help. 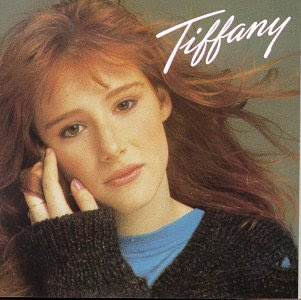 That said, I don't agree with many reviews of the film that take the filmmakers to task for exploiting Turner and McCormick. I think that they deliberately tried to portray them in the best possible light. I was sympathetic to their situation, although I didn't condone their behavior that came out of it. If anyone came out looking bad in this movie, it's Tiffany herself who, despite the late 80s restraining order on Turner, continues to feed his obsession by meeting for a few minutes after shows and at various conventions - the most surprising of which was Glamourcon which featured adult film stars and Playboy playmates (Tiffany is there because she posed for Playboy) It also featured the hilariously blurred out faces of other convention attendees. Has Tiffany come to terms with her stalker and decided that further attempts to restrain him would only serve to invigorate his attempts or does this kind of thing feed her ego? It's hard to tell.

Fan is short for fanatic, so I guess that it might be hard for some to know when they've crossed the line between fandom and psychotic obsessions. For me, I was never much of a Tiffany fan - I did like "I Think We're Alone Now" and "Could've Been" but I always liked Debbie Gibson. And now, they're together in Mega Python vs. Gatoroid which is, sadly, not streaming on Netflix.

Hi Dan, glad you got a chance to check out the movie. The thing I couldn't get over was how much Jeff just lies and lies and no one calls him on it. (His friends, etc.) I suppose they're just used to it by now.
Also it is an excellent point that Tiffany comes out looking bad from the movie! If she had any self-respect she would keep the likes of Jeff far away.
Thanks for the shout-out :B
-RH

That's a good point re: Jeff. I imagine his delusions have pretty deep roots, so calling him on it probably wouldn't do much good. Although there were many times during the film I just wanted to say "Tiffany does NOT think about you this much!!" I especially liked the part where he thought the security descending around him meant that Tiffany was "protecting him."

Thanks for recommending it!