His and hers blogging?

When I was doing NaBloPoMo back in November, I added a column to Tweetdeck that searched for the hashtag #NaBloPoMo. I did this because I wondered how many other people out there were participating in some semi-official capacity. I figured, if nothing else, it would be kind of fun to see the other types of blogs out there as finding quality blogs seems to be getting harder and harder these days. But what has really stood out like a sore thumb to me is how nearly all of the blogs that I found in that search were written by women. This led me to ponder - are women more likely to blog than men?

I'm sure this is something that doesn't have an easy answer. I was recently told that blogging is "ancient history" and I'm sure, for most of the upcoming generation, it really is. Why write something with paragraphs when you can abuse the English language in a tweet or post a TMI Facebook status update? I have my own personal reasons for soldiering on, as I'm sure many people that still blog do. As I've said before, as much as I enjoy Twitter and its immediate nature, 140 characters is just not enough for me. But is there something inherent in blogging that would make it more attractive to women than to men? I really don't know.

I would be interested in knowing what the gender distribution amongst active blogs out there is right now. Perhaps the gender disparity isn't as predominant as I'm suspecting it is. Take my blogroll, for instance. I link to 17 different blogs and of those, only 4 of them are written by women. All of these women are women with whom I am acquainted in the so-called "real world" - one of them is my spouse. All of these women write personal blogs with a variety of posts as opposed to being focused on a single topic (politics, music, books, whatever.) The remaining 13 are all written by men, a large number of which are "subject" blogs (mostly music blogs) which are updated rather frequently. The more personal blogs seem to not be updated as often.

With 13 blogs by men and only four by women in my blogroll, my assertion that blogging feels like a more female-oriented activity seems to not hold much water. But when I was following the NaBloPoMo hashtag, it was overwhelming female. And then, just this last week, I got a spam e-mail from the NaBloPoMo web site saying that it will be "slowly merged" with the BlogHer site. BlogHer is what the name implies - a blogging site for women. It just solidifies in my brain that women are more likely to take blogging seriously, although there are certainly exceptions to that rule. For certain, there is no equivalent site for male bloggers.

Perhaps what I'm actually observing is the idea that women are more likely to keep a blog that is a "personal journal" of sorts, whereas men are less inclined to do so. While one of my rules of blogging is "Blogging is blogging and journaling is journaling -- know the difference" I will admit that I probably delve more into personal topics than a lot of other guys that keep blogs out there. Again, there are some notable exceptions to the rule and honestly, those are some of my favorite blogs. I always admire men that aren't afraid to tell stories from their lives - even and especially the ones that might make them mildly vulnerable. I also really enjoy getting to know a person a little bit through their blog. It's as if you're being given little pieces slowly over time vs. being able to go look at all their pictures on a Facebook page. I sometimes feel strange when I refer to someone I know via blogging as a friend beings I chances are good that I haven't met them, but the world is what it is and yeah, I will say that I've made some pretty good friends through blogging, even though I have not actually met upwards of 90% of them.

In the end, it's more idle curiosity that got me to wondering about the gender spread in blogging. I have massive amounts of respect for anyone - male or female - that can write in such a way that keeps me coming back day after day, regardless of how frequently the content is actually updated. The blogosphere is littered with blogs that have been abandoned and that's ok - it's certainly not for everyone. It takes a certain dedication that many people just simply don't have time for. But those that continue to do it, even in the face of decreasing relevance, have my admiration.

The poster below kind of sums up my feelings on blogging - even my own blog. 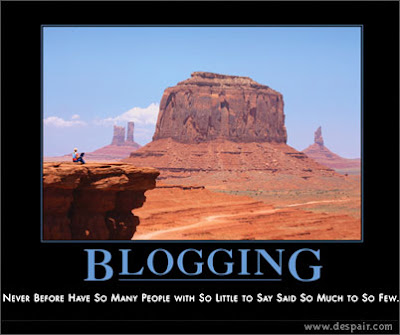 But that certainly doesn't mean I'll stop. Nor should anyone else if they're enjoying it. Perhaps I need to think about it less and just sit back and enjoy the ride - words that could apply to many many situations.
Posted by Dan at 4/01/2011 09:10:00 PM