The case against reflexive Gaga hating 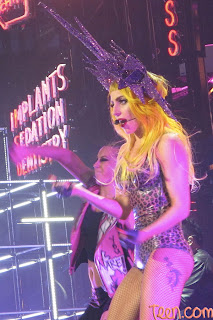 The blogosphere is abuzz this morning with everyone and their pet rock weighing in on the relative worth (or lack thereof) of Lady Gaga's new single "Judas" and her recently unveiled cover for her album forthcoming album Born This Way. Maybe it's just me, but could people be any more negative?

I get where they're coming from. I, too, was once a reflexive Gaga hater. I don't know what made me dislike and resist her, but I did. I found her persona simple and her music lacking and I felt very much that she was nothing more than a Madonna rip-off - another in a long line of pretenders to the throne of her Madgesty. I think that, as a long time Madonna fan, I felt that giving in to Gaga would be akin to cheating on the icon I've followed for decades. But eventually, I gave in. I can't quite pinpoint where I started to come around to Gaga. It might have been in the San Rio store in L.A. in 2009 when I finally paid attention to "Poker Face." It might have been when Heidi used a lot of Gaga on her story soundtrack for Double Blind. Or maybe it was with "Bad Romance" and The Fame Monster - a point at which she really did "level up" a la Madonna with True Blue. Whatever it was, it happened. As my sister pointed out to me, it was only a matter of time.

Even though I know where they're coming from, I really don't understand it now and frankly, it's starting to really piss me off. Everything that Gaga does now is somehow dismissed out of hand by most people that should, by rights, be giving her the biggest chance. Instead, they seem to be steering clear of her almost out of some principle, dismissing every new song or look or piece of artwork out of hand and not giving it any sort of chance. I don't know that Gaga cares much, but I think that hating something on principle is not all that different (or misguided) than the opposite reaction - declaring a blinding love for when an artist really does turn out shit.

In many ways, this is where the Madonna comparison is most apt. The reflexive hatred of Madonna in the 80s and 90s is legendary. So little of it had to do with the music - most of it was based on perception and image. Admittedly, Madonna courted the controversy in much the same way that Gaga is. I think what bothers me the most about Gaga hatred is I feel like, in hating on Gaga, we're all turning into the worst version of our parents. You know what I'm talking about - the "would you turn that noise down?" and the "back in my day, there was REAL music." I was lucky in the fact that my folks really didn't do that too much - they're worst version of that was disliking remakes of 60s songs - but I feel like the sentiment against Gaga really seems to stem from that source a lot, especially amongst people my age. I feel like if we react like that, we're no better than the Madonna haters of yesteryear.

The thing is, good pop music is in short supply these days. I was listening to a genius playlist that I made based off of Belinda Carlisle's "Heaven Is A Place On Earth" and on that 50 song playlist were so many classic pop songs from the late 80s and even from the 90s. I feel like pop fell out of favor with the advent of grunge and while it had a bit of a renaissance with Britney Spears and the boy bands of the late 90s, it has never made a true and full comeback.

I was reading the Billboard Hot 100 the other day and, as has been true for nearly a decade now, every other song was "featuring" some rapper. Yes, we have Britney and Katy Perry charting in the upper echelons. But is anyone turning out pop music in its truest form like Gaga is? Is it a crime for something new to have something borrowed as well? So quickly we forget how Madonna co-opted other parts of the pop culture and brazenly made them her own. Sure, she might have been better and subtler about it than Gaga, but every time someone accuses Gaga of stealing something I just can't help but think that. With Gaga, I feel like there's a future for pure pop music. I don't feel like the future of pop music is in the hands of Britney Spears of Katy Perry. Each Britney album feels more and more forced and Katy Perry still has to prove herself to me. I'm man enough to admit that I like songs by both Spears and Perry and I'm also man enough to admit that Gaga is the one carrying the torch forward.

I'm used to the music I love being put down and hated on by most people - specifically, most men in our society. That doesn't bother me nearly as much as it used to. What does bother me is hating something on principle when, by rights, it's filling the void left by a Madonna that doesn't care about music anymore or a Whitney Houston whose voice has been trashed by drugs. Insert any other example you like, but for me, the fact remains that Gaga is making music that remains true to that which I have loved my whole life. She doesn't always succeed, but she comes closer than most.

The one point I will concede to the Gaga haters is that she is dreadfully overexposed at this point, and I do feel like she's bungling this album release a bit. But who really knows? The rules for releasing an album and singles are as clear as mud these days, so perhaps she really knows what she's doing? What she does need to do is disappear for a while, a la Madonna in 1988 and release NOTHING so that we don't gorge ourselves on Gaga and then puke it all back up.

I know this is not a popular opinion and I fully expect to be skewered for it. However, I stand by it. Gaga is imperfect and flawed. She's been controversial for controversy's sake, pushed buttons and stood up for herself and others that can't or that society has marginalized. She's also produced some amazing music. In these respects I find the comparison to Madonna to be most valid and why I feel like there's room enough for both in my life.

Perhaps Tori Amos is right when she said “She’s what I call a meteor — singers who entertain people for a while. Hey, there’s nothing wrong with that… She wants to entertain people. Right now, half the world is depressed and they need to be entertained. So her timing’s perfect.” Maybe Gaga will flame out in a year, but I will guarantee you that when I'm in the nursing home, they'll be asking me to turn her music down.
Posted by Dan at 4/16/2011 01:59:00 PM

I liked her Monster era, but the whole Born This Way thing is not my cuppa... at all. It highlights aspects of her I just don't like (I won't enumerate, but one example is a tendency to sing histrionically with a million accents. I like her best when she is more pure).

As for hating, I tend to avoid her on my blog for that reason. I think I DO resent her own tendency to imply her work is innovative when it is not (musically, that is- her visuals are more unique). I am not sure why I would be expected to like Lady Gaga any more than any other female artist (Kylie etc).

True about Madonna co-opting other cultures and music. For me, she supplied something that I related to more personally. Her beauty, the way she changed her sound and upped the ante. It is hard for me to get at Gaga's message, wrapped in horns and monsters. I just don't dig that - it's that simple. Ironically, I think Gaga is probably a far nicer person than Madonna. Who knows how that will play out in 20 years, but she's cute when she is not blathering about her little monster. (I have an capital I issue with that, but I know she MEANS well)

I am also not hearing the game uppage in this round that we heard on Monster. I think the reason may be that it's the same collaborators, so the sound is not so evolving. The album may surprise us. I also want a worthy ballad from her and You And I will not be it!

In the end, I suspect this whole phenom you describe is part of the extreme fame game.

I will confess I am a reflexive Gaga hater. At first it was because she was hailed by all to be different and an innovator, when in reality the songs are take-offs on things that have been heard many times before.
And now having seen her performances & videos & how she keeps getting progressively weirder a freakyier, it just annoys me all the praise that is heaped on her. She is all shock and no awe. And as with the beloved Madonna it seems she is beginning to believe her own press & acts like she deserves to be worshiped.
That is why her songs don't get much of a chance to win me over, although a couple have. Why does each song seem to have something terribly annoying mixed in with what would otherwise be good. The intros to Bad Romance and Judas do not hold up to repeat listens for me. Very annoying.
The good thing is she has brought dancier pop music back into the limelight and many less annoying personalities are getting the chance to get heard because of her.

Steve - I agree. I think that whenever anyone gets to the level of white-hot fame that Gaga has achieved in a relatively short period of time, there are going to be people that hate her on principle. I don't think that's right - rather the music should be judged on its merits. I have no issue with people that dislike her as long as they can provide me with a solid beef with the music.

Dwayne - I know you and I differ on our opinion of Madonna so it's not surprising to me that our opinion of Gaga would be dissimilar as well. I agree that her presence has opened the door for more pure pop music. I also admire her for having the courage of her convictions, which is something that many people, famous or not, don't see to have.