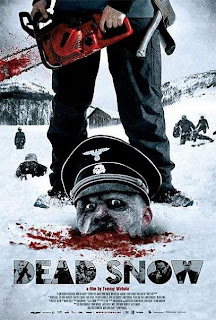 Is it possible to make zombies even less sympathetic than they already are? Well, by golly, the makers of the Norwegian horror film Dead Snow found a way - turn them into undead Nazis. If the Indiana Jones films taught us nothing else, it's that Nazis are the perfect bad guys. I mean, how can you sympathize with them? It's not possible. So with zombie Nazis, you have what is quite possible a beyond perfect bad guy.

The set up of Dead Snow is one horror fans have seen a million times before. College students, a secluded cabin (this time on the Norwegian fjord), hormones in overdrive and no cell phone service. One of the characters even mentions "how many movies start out with friends going to a cabin in the woods with no cell phone service?" At least what's about to happen doesn't take them by complete surprise.

Soon, a mysterious stranger shows up to infodump the back story. The area where they are staying was, during WWII, occupied by a particularly nasty group of Nazis. They tortured and stole from the villagers until one night, toward the end of the war, the Nazis and their leader were chased into the woods, never to be seen again. An evil lurks in these mountains, the stranger says, and you won't like it when you're holding your own intestines.

It doesn't take long for zombie mayhem to ensue, although I will say that for about the first half, until the first really good zombie attack, the movie felt more like a slasher film. I chalk that up to the fact that we don't get a good look at the zombies - they hide in the trees and under the cover of darkness. But once they attack a la Night of the Living Dead, with zombie hands coming through the windows, it feels every little bit like a zombie movie.

These are fast zombies and don't seem to subscribe to the "kill the brain, kill the ghoul" law of zombies, but the movie more than makes up for it. I didn't find it so much scary as I did gory and as I so frequently say, the scariness of the movie for me is so often inversely proportional to the amount of gore. There are some pretty gruesome deaths, one of which was followed by a line that made me laugh out loud.

This movie owes a huge debt to other movies, most specifically Evil Dead. Apart from the obvious cabin in the woods, there's even a chainsaw and an amputation. But more than that, it pays homage to zombie movies that came before it, mostly a little bit tongue in cheek. There's even a cockamamie secondary storyline that wasn't really referenced all that much until toward the end that seemed lifted straight out of Pirates of the Caribbean: The Curse of the Black Pearl.

Dead Snow is cheesy and gory and was a very enjoyable way to spend 90 minutes on my day off. Beware - it is the first zombie movie that I have ever seen that had subtitles. It did not detract from the experience so don't let it deter you from watching..