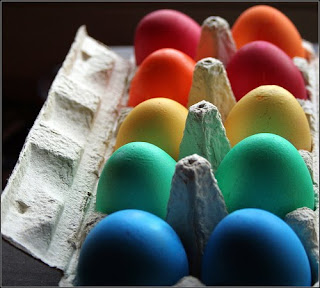 We colored eggs this morning which, for the record, I don't really like doing a terrible lot. I dislike most of the stuff associated with Easter. Easter candy kind of annoys me. I've never been one for egg hunts or anything like that - probably because I was always too old for them at our church growing up while my younger brother and sister were not. I'm kind of dreading having to fill plastic eggs after Anna goes to sleep tonight because yes, Virginia, she still believes in the Easter Bunny and who am I to crush that? After a bit of obligatory bitching, I kind of got into the spirit of it though. It was kind of fun to blow out the eggs yolks (every time we try to hard boil them, they crack plus no one here eats hard boiled eggs) and I got to go around annoyingly saying the word "PAAS" over and over again until my wife and daughter were ready to hit me with a brick.

It got me to thinking about the time when I was probably in the 5th grade and for whatever reason, we decorated eggs in my Lutheran Sunday School class. We didn't do the dyes as that would have been far too messy for our Sunday best. Instead, there were crayons and markers and little bits of discarded fabric and other crafty items that we could glue onto our eggs.

Amidst all the crap that they had for us to decorate our eggs with was a small scrap of fabric that was a golden band with a little fringe on the edge. To me, it looked just like a sweat band, with hair going over the top of it. Those of you who know me well know where this is going. Yep, that's right... 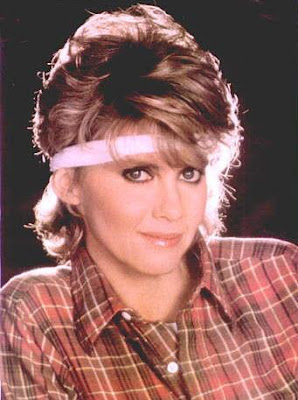 I remember drawing the face on it and putting a little cartoon balloon down by the mouth and it was saying "Let's Get Physical." Oh my God, I took so much grief from my Sunday School classmates. And oddly, I had almost completely forgotten about it until this morning. That's how deeply buried in my subconscious it was.

Of course, I told this story to Heidi and she laughed uproariously. And, as is her standard retort when I tell stories like this, she said "And yet, somehow, you turned out straight." She added "Seriously, Dan, that's the type of story a gay man of our age would tell!" followed by "I fucking love you SO MUCH." It worked out best for everybody involved that I did turn out straight - especially Anna who wouldn't be here otherwise. I chalk it up to having only one functioning copy of the gay gene. It gets to the part where it codes for the sexual orientation bit and it just spits out a nonsense protein. And if that is not geeky humor, I don't know what is.

Now that I've completely humiliated myself, I think I'll just leave everyone with a Happy Easter if you are celebrating it. May you not eat your weight in chocolate eggs.
Posted by Dan at 4/23/2011 11:29:00 AM

It's all true! The egg, of course, is long gone. I wish I had a picture of it to prove the truth behind this story.