Yesterday started out on rather a bad note. I picked up my glasses from my bedside table and the left temple completely and utterly fell off. You would have thought that I had thrown them across the room - honestly, all I did was pick them up! I am notoriously hell on glasses, and these frames, having been a little more of the wiry type than I had been accustomed to had suffered unduly. As I held the broken glasses in my hands, trying to put them back together again which is no small feat when you can't see, Heidi woke up and wondered what I was cussing at. "My glasses just broke!" I said. Ever the resourceful one, she pulled out the iPad and looked up Lenscrafters and saw they had 50% off lenses. Plus we had our AAA discount which would buy us 30% off - whichever was the better deal. We had already been planning on heading down to Ankeny to go eat at IHOP just for the fun of it, so we decided to head down to Des Moines as well. So I found my old glasses from 2 years ago and off we went. It was around 9AM.

After getting sufficiently full on pancakes we set out for Merle Hay Mall. Merle Hay Mall was the site of many after-Christmas mall trips for my family when I was in college so we could spend our Christmas cash. It is, like many malls, a shadow of its former self, but it's trying hard in the changing economy. We arrived at Lenscrafters and it didn't take me long to pick out a frame that I really liked. I had always been partial to my Dr. Who glasses that I wore from 2006-2009 and the only reason I gave them up is because they were so broken that I couldn't repair them anymore. Not surprisingly, I picked out a frame that looked a lot like them but was yet new and exciting at the same time. They were Ray Ban 5169 2383 frames, black plastic frames with a hint of green as well. All I had to do was have them get my prescription from Pearle in Ames and we'd be set to go.

Only Pearle couldn't find my prescription. And when they did, it was expired. At first, I thought, well, why can't they just use it anyway? And then I thought about it in terms of a prescription I might get in my work. There's no way on God's green Earth I would take a 2 year old prescription. Not only is it not in the best interest of the patient as people's health can and does change over the course of 2 years, it's also illegal. So I set about trying to figure out how to remedy this. The easiest option would be to just get an eye exam right there. The only trouble was, they were double booked. So was the Valley West Mall location and the Jordan Creek location. Heidi pulled up "Des Moines optometrists" on her Palm Pre and started calling around while I headed down to the Merle Hay Mall Pearle Vision. They had no one on site that day AND it just so happened that the Iowa Optometric Association was holding their spring meeting that day, so not many doctors would be around. Just my luck. I need an eye doctor and they're all at a meeting! They did, however, call out to the Pearle Vision Express at Southridge Mall and they did have an opening. So we piled in the car again and headed across town to the south side of Des Moines. By now, it was about 1PM, and my appointment was for 2:15PM.

The exam was uneventful and pretty much like every other eye exam I've had in the past. When I got there, I was immediately taken aback by all the Christian imagery - they had the Ten Commandments posted at the reception desk. I wondered if I qualified to be seen since I'm a heathen, gay-people loving, barely-church-going kind of guy, but I must have looked the part. The office staff was very nice and the doctor pleasant and competent. They even took my insurance which was nice. A $25 copay and an hour later, we were out the door and headed back to Merle Hay Mall so they could get started on my glasses. Heidi was going to wait for me in the car but came in because Anna was getting crabby and complaining about the lack of internet in the parking lot. Privileged child. Time at the tone: around 4:30PM.

We went to supper at Applebee's and had supper. After supper, I go back to Lenscrafters. It's now 5:45 PM and I'm told that one of the lenses was made wrong, so they had to redo it, which added another 30 minutes to our wait. At this point, everyone's edges were fraying so we just sat at the play lot while Anna, the tallest kid there, tore around and burned off all the energy that Heidi and I both seemed to be lacking. At 6:30, I headed back in and, at long last, my new glasses were on my face.

We stopped in Ankeny on the way home at a park (we had promised to take Anna to a park in Des Moines but it just never worked out.) While we were there, Heidi snapped this picture of me with my phone. 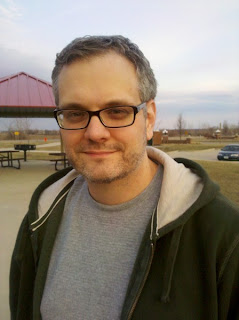 So I'm back to looking like a NASA scientist in the 60s, but hey, I really like it. And again, there's something Whovian about them.

Lenscrafters. Glasses in about an hour. Or eight.

Postscript: Even though we blew the whole day getting me glasses, my only regret of the day is patronizing an establishment that felt the need to shove its Christianity down my throat. For all the screaming of the right wing and how the "liberal agenda" is being forced on them (especially the nefarious "gay agenda"), I really felt like this was as bad as what they complain about. No, they never mentioned God once, but for all the Christian imagery and literature in the office, they might as well have. The doctor did ask me if I listened to Jan Mickelson in the morning. Mickelson, for those that don't know, is our own sort of homegrown Rush Limbaugh and is virulently homophobic. Also, checking out the office's web site, I noticed that they link to Exodus International, the famous "pray the gay away" group. In the light of day today, I find myself thinking, what if I had been a gay man, there with my partner and this had been my only avenue in a day long effort to be able to see? I find it unlikely that the office would have refused to see me, but would I have been able to swallow it and be seen - which I did yesterday and only to be left with a bitter aftertaste. The fact that my money might be going to further this kind of homophobic bullshit sickens me, but I'm going to count this as balancing out his karma and to never forget that this stuff is out there. It doesn't affect me directly, but man, there are so many people I know and love that it does affect. So to them, I am sorry. But I really really needed to see.
Posted by Dan at 4/03/2011 12:01:00 PM

Well, the damage is done for them. I won't give business to a company like Pearle that lets a franchisee display religious content out like that. So thanks for mentioning it, even though it meant an annoying visit for you. And thanks for continuing to ask those questions. I'd like to think that I would have just left, but given your full circumstances, I don't know for sure.

I try not to give places like that business either. I'm feeling really torn on the whole Target thing - where am I supposed to shop? Like Wal-Mart is really any better? In the end, I just do my best and keep speaking up. It's a small part, but it's what I have.