The sun is bursting right out of a Paper Bag 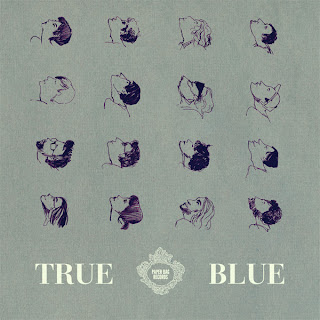 Madonna covers are such a mixed bag as I've discussed before. Part of the trouble is that Madonna really OWNS her songs - especially her biggest hits - and anyone else trying to sing them usually comes off as bad celebrity karaoke. So I was equal parts intrigued and worried when I heard about the Paper Bag Records release of a True Blue covers album in celebration of their 8th anniversary and True Blue's *gulp* TWENTY FIFTH anniversary. While True Blue is no Like A Prayer or Ray of Light in terms of being beyond criticism, the 1986 album is home to some of her biggest hits of the 80s. Over half the album was released as singles, and three of the five singles hit number one. So some of the songs they were going to attempt to cover were going to be tough to do.

This is certainly not the first attempt at a Madonna covers album. There are the dreadful Virgin Voices albums and the better but still underwhelming Through The Wilderness. No one could really separate Madonna from her songs. Up until now, no one has attempted to cover a whole album a la Camper Van Beethoven's cover of Fleetwood Mac's Tusk album. Much like on that album, the results of covering True Blue are mixed, but overall a worthwhile endeavor.

I listened to the whole thing today and imagine my surprise when there is really only one God-awful unlistenable track on the whole thing - that being PS I Love You's cover of "Where's The Party?" (or as it's known around our house, "Where's The Potty?") "Where's The Party?" kind of falls in between the cracks with Madonna songs - it's fairly well known, but since it was not a single, it's been largely forgotten. It really deserved to be a single and would have done well, but this version should be buried deep within the earth.

But getting 8 out of 9 tracks mostly right is pretty impressive. Many blog posts have been singling out Woodhands' version of "Papa Don't Preach" as a misfire. Apart from having the honor of being a cover of a huge Madonna hit that has arguably aged the least gracefully, I enjoyed their take on it. The more straight forward tactic taken on songs like "La Isla Bonita" and "Live To Tell" were less impressive. In my book, there are two rules to a successful cover - 1) put your own stamp on it and 2) be respectful to the original. "LIB" and "LTT" got the second part right, almost to a fault, while ignoring the first rule. Oddly enough, the cover of "Open Your Heart" which, by rights, should not work, ends up working out better than most of the tracks.

But my far and away favorite of all the songs is Born Ruffians' version of the much maligned Madonna album track "Jimmy Jimmy." Poor "Jimmy Jimmy." All it ever did was be produced in the 80s. It's Madonna fluff, to be sure. But as is the case with most of Madonna's fluff during that time period, it was pretty awesome fluff. Hear for yourself.

Well, Born Ruffians took all the 80s production out of it and I don't know how to describe it, but really you have to hear it. It's all dressed up for a new generation. Listen here - it's track #8. Although I have to say that I was ticked that they did not include the "oop shoo boop oop boop shoo la la la" part (about 3:17 in the above video) that made the original so endearing as well as ridiculous. It's like if they decided to cover Madonna's "Stay" and left out the "then we can scoop scoop scoop scoodlye bee bop." Blasphemy. Oh well, nothing's perfect.

The best part is you can download the whole shootin' match for free at Paper Bag Records web site. If this bunch of Madonna covers gets my stamp of approval, you know it must be worthy.