It opened up my eyes 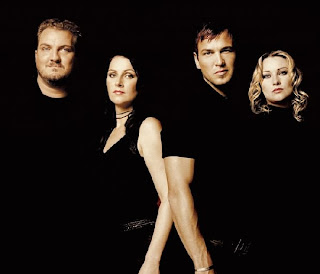 For no particular reason, Ace of Base's "The Sign" has been showing up more and more in my listening habits. I think it's because it is on the genius playlist that I mentioned in my last post. On my way back from taking a friend out to dinner for his birthday on Friday night, it shuffled up and listening to it got me to thinking about how well it holds up, nearly 20 years after its initial release.

I bought The Sign (the album) based on the strength of the initial single "All That She Wants." It was inescapable on the radio in the fall of 1993. Looking back now, it was kind of an anomaly amongst what was getting played on the radio back then. I had all but abandoned most Hot 100 fare for country-pop as the Nirvana/Pearl Jam/grunge that was played ad nauseum back then was just not my thing. I certainly wasn't expecting Swedish pop to take hold again. I mean, this was NOT Roxette or ABBA and this was the early 90s. But to no one's surprise, I lapped up the sound of "All That She Wants." My sister, who was in junior high at the time, also got into the song, buying the cassingle if memory serves.

However, the purchase of The Sign was a bit of a let down. It just didn't click with me. Some of that might have been because the instant I bought it, my sister commandeered it and I barely got to listen to it all of Christmas break. In any event, I was resigned to Ace of Base being a one-hit wonder. I heard of the impending release of "The Sign" as a single and figured it would peak at #83 and that would be the end of it. I couldn't have been more wrong. "The Sign" spent 6 weeks at #1 and was the freaking best selling single of 1994! The Sign sold 9 million copies (many of which, no doubt, as in used CD stores.) I still own mine, having warmed up to it substantially. Once I got back to school after Christmas break, I couldn't stop listening to it.

So here's my question - which single holds up better? "All That She Wants" or "The Sign"? My money is on "The Sign" if for no other reason than it contains my oft-quoted line "life is demanding, without understanding."

I agree. The Sign holds up very well after all this time. Maybe due to the fact that no one (in this country anyways) tried copying their reggae-pop sound. We didn't really burn out on it. The whole album holds up well and would sound fresh to new ears today I think.
Oh man you have reminded me of Dancer in a Daydream. I must go play it loud right now.