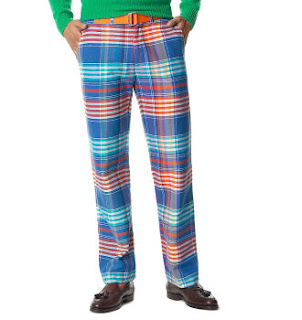 I gave in this morning and bought four new pairs of pants. It mostly makes me feel like a failure, but oddly enough, it also feels like a call to arms.

Over the last few weeks, I've noticed that my pants had not been fitting as well as I would like them to. Mornings have been a struggle because the combination of my pants not fitting and having the worst case of closet malaise in recent memory usually had me getting out at least five different things to wear, only to reject them all and wind up wearing what I started with. But that hasn't changed the fact that they have been uncomfortable to wear.

This is frustrating on many levels as I really have been eating better this year. French fries are an infrequent treat and I do try to watch how much I'm eating. It's hard at work where the selections are not the healthiest but you can always eat off the salad bar. But the fact remains that I have gained some weight this year - probably not so much that you can notice it unless you're invading my personal space - but I notice it, primarily because of my previously mentioned ill fitting pants. I also battle a less-than-desirable blood lipid profile that is at least 60% genetic. Whenever I vocalize that I would like to lose weight, I'm usually met with a chorus of WHAT??? I may not look it, but alas, according to the highly-flawed-but-still-best-measure-we-have BMI, I am overweight.

I know that the key component that I'm missing is exercise. I used to walk to work all the time, but this, that or the other thing always comes up at the last minute and half the time, I end up driving. I always feel like there's no time in my already packed life for exercise when clearly, it's something I just need to make time for. Part of my trouble is that I'm constantly tired and trying to muster up the ambition to do anything that's remotely like exercise seems like it takes a Herculean amount of energy. I had grand plans earlier this year when I vowed to make some small changes slowly over time so as to lessen the impact. While my attempts at eating better have been mostly a success, I have still caved to emotional eating on many occasions (especially recently) and my efforts to work even mild activity in have met with complete failure.

The purchasing of new pants was met with a lot of resistance. As I said, I equated it with failure. When I was out with Heidi buying them this morning I said "I don't want to buy many because I'll be back in my old pants soon." Who knows if that'll happen or not. I'm realistic enough to know that unless I change careers and become a male escort, I have to have pants to wear to work.

A lot of people I know are trying to increase their activity. I'm still not sure how I'm going to do it, but I do know that it'll involve baby steps. I am not going to announce a bold new initiative to create a new me that runs a marathon daily because for me that's just an invitation to failure. But hopefully I can find something that holds my feet to the fire a little bit better than an interventional cardiac cath procedure. Ultimately, fitness is a solitary journey and I'm not usually the best when left to my own devices. We shall see.

Good luck. It appears that I'm on and off the exercise wagon all the time . . . and occasionally, I'm run over by the wagon. Currently, I'm trying to get back on.

Good luck with the exercise and all, but I have to say I was hoping to read about these awesome plaid pants you bought. Disappointing.

I've started, this year, working out twice a year at our local YMCA while my 5yo has swim practice. It's been interesting but weird.

Also, it turns out that twice a week doesn't really make much difference, weight-wise. Or else I'm making up the difference in food, perhaps.

Those plaid pants make the post, don't they? I couldn't resist them.

I think, for those of us that don't completely get a high off of physical activity, that exercise is always going to involve falling off the wagon and getting back on. We'll see how I do.