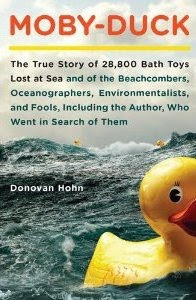 I can safely say that this is the first book that I read thanks to QRANK, the trivia game for your iPhone or iPad. Moby Duck was the subject of one of the 1,000 point questions and after hearing about its subject matter, I knew I had to read it. I have always been a sucker for everyday things that spill out of trucks or trains or, in this case, boats. I can trace that back to one April 1st when I was in college and reading in The Daily Iowan about a train derailment over the Iowa River in the middle of campus that left the river filled with rubber duckies. I remember thinking, "I need to walk down past the river today to see that." And then I remembered the date. April Fools' Day. There were no rubber duckies in the Iowa River. And I was the fool.

But there were rubber ducks - and beavers, frogs and turtles - in the North Pacific in 1992 when a freighter transporting them from China to the U.S. hit rough weather and they went overboard. 28,800 of them, to be precise. And this got the attention of Donovan Hohn, who went on the adventure that became the book Moby Duck. He went beachcombing in Alaska, sailed through the Garbage Patch of the Pacific, toured a toy factory in China's Pearl River Delta and then travels on an icebreaker through Northwest Territories. It's truly an out-of-this-world, once in a lifetime adventure.

If only it were more interesting. But alas, it really wasn't.

I wanted to like this book - believe me, I really did. And there were parts of it that I did enjoy. But as a whole, the entire thing rubbed me the wrong way. Maybe it was because Hohn was running of to have what basically amounted to a juvenile "find-myself" adventure while his wife was pregnant and then at home with a newborn baby. This seemed to weigh on his mind, but let me tell you, there's no way I would have missed the early days of my daughter's life no matter how sleep deprived and crazy making it was. In addition to this, there was something very inauthentic about the adventure. The best books like this are written based on adventures that happen to turn out to be good enough to turn into books. In this case, it felt very much like he went on the adventure with the book in fully in mind. So in addition to being navel-gazing and self-indulgent, it all felt like a conversation that someone sat at home in front of the mirror before they went out and actually had the conversation.

But perhaps the worst offense was making this book out to be about the toys that had gone overboard. They were the ploy to get you in, but really, they were nothing more than that. They got mentioned every now and then, when it had been long enough since the last mention that he felt like they should be mentioned again. I just didn't buy into the adventure at all and really, I wanted more spilled toys.

That's not to say that it was all bad. The one thing that I've learned is that I really do enjoy stories that involve people being on a boat. Those were the best parts of the books - when Hohn was on a boat. Between this and In The Heart of the Sea, it makes me want to take a crack at more books that involve sea voyages.

My favorite "At Sea" books:

I've also read a couple Nathaniel Philbrick books (SEA OF GLORY is quite good) and bought IN THE HEART OF THE SEA on your recommendation. Let me know if you check out any of these; I esp. recommend SHADOW DIVERS.

Thanks Brendan - I'll be sure to add those to my TBR pile. After I finish The Walking Dead: Compendium One, I'm at 19 books for the year!