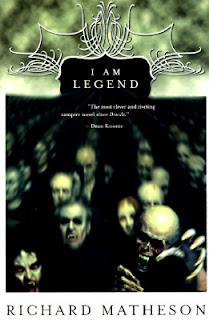 While not quite a zombie story, Richard Matheson's I Am Legend is definitely a piece of post-apocalyptic fiction that has zombie-ish elements to it. But this time, instead of a zombie apocalypse, it's a vampire apocalypse. I read this short story for the first time a few years back and was a bit underwhelmed. For all the hype that had surrounded it, I just didn't really feel the horror of it - perhaps it was the victim of over inflated expectations. So about a year ago, I read it again and found it completely engaging - scary in just the right way. So who knows what changed along the way.

Anyway, via Ghost in the Machine, I found a link to the teaser trailer for movie version that has been talked about for probably 10+ years now. After going through several stars and several directors, Will Smith is playing Robert Neville. The movie bears very little resemblance to the book, but this is just the teaser, Overall, I am fairly impressed. Will Smith seems to be playing it pretty much straight - if ever a movie role did not call for his wink-wink brand of humor, it would be I Am Legend. And besides, I despise it when a movie that is supposed to be scary plays it for laughs.

Brian C here..My wife and i went to see Oceans 13 and like it...we saw the I AM LEGEND Preview and i was very excited as was my wife who just cant quite do scary movies...She saw will smith and thinks he is funny and likes his movies so she was interested right away..i told her that i had read the story in college and unless Martin Lawrence was also in this movie that it had a very low probability of being a movie to go to. After realizing that it was not the sequal to "HITCH" she pretty much said "Yeah...I think you can go see that by yourself" Gotta love my strait the point wife...