...and this man is still alive. 35 years old today and really, I feel fabulous. That is not to say that every day is a bed of roses, but overall, life is good. It feels weird to be 35 - I remember a pharmacist that I worked with when I was in college who had always predicted that his 35th year would be the best year of his life. I don't recall if it turned out that way, but man, that's peaking way too early if you ask me. I've said it so many times that people are probably sick of it, but I just love being in my 30s. They are so much better than my 20s - perhaps because I spent so much of my 20s in school, but more than that, I also spent most of my 20s feeling awful and depressed. Also, I feel like once I hit 30, I was really and truly an adult. It certainly helped that by the time I was 30, I had a child. Not to say that having a child legitimizes you or that you have to have a child to be a true adult (that was only true at my grandma's house - until you had a kid of your own, you sat at the kids' table), but it sure makes you grow up fast.

The party was last night - it was a small one with just Heidi and Anna and Heidi's mom who is here for Anna's dance recital this weekend. We had a cake that looked like it had been decorated by a zombie (how apropos!) but was very tasty. 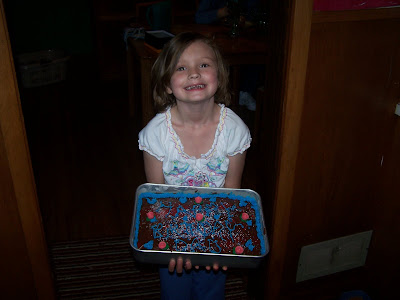 There were actually 35 candles on the cake. We had 31, and since we were so close, Heidi got 4 matches and put them on. We nearly burned down the house. 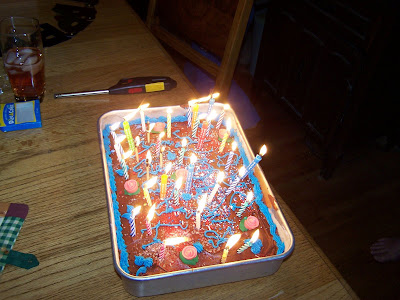 I also got a homemade T-shirt that says "What would Cher do?" that I can wear to Pride tomorrow. I know, it's cheesy and stereotyped, but it wouldn't be Pride without it. I saw it on Cafepress, but 23 bucks for a shirt that will immediately become a bed shirt? I just couldn't justify it. The one I have is not nearly as colorful, but it will do.

Like I said, being 35 is kind of weird - I'm half way through my beloved 30s, inching closer to 40 (as I'm sure Jeff and I will say when that day arrives, "I hate being 40!" just like Barbra "hated being 60!") But growing older doesn't bother me all that much - it's a privilege denied to many. And rather than declare that my 35th year will be the best year of my life, I will instead declare it to be the best year so far. Each year just keeps on getting better, I tell you. Each year, I learn more about myself, open more doors, allow myself to be me in ways that I never thought I could. Each year brings an even clearer realization of who I am and what my true "purpose" is for lack of a better word. Although I have had setbacks (as anyone might), I wouldn't change a thing, as a wise person once said (Kylie, I think.)

oh my gosh i had no idea it was your birthday! Happy Birthday!! I'm so glad i made your acquaintance... i hope you have a swell day and that our friendship grows over the coming year! PS - love the cake. Cutest. Daughter. Ever.

Happy Birthday! I wish you all the best and I know you're going to have a great week with Pride, the trip to Chicago and everything else. Heidi, Anna and Heidi's mom gave you quite the celebration! For me, 35 was a great year, but 37's even better... For me it only proves your point about this being your best year so far--things will only get better. :)

ZOMBIE CAKE!! How cool is that?!

Looks like you guys had a great time on your b'day! :)

Happy birthday! I Want that cake!!!

Dan..BC here...Just think if you werein a logans run would you would already been renewed..in theory. As for me i would definately run..if not for principle then just to go out in a blaze of glory..and be shot by Micheal York..Happy Birthday Dan..we will see you soon....

Belatedly Happy B'day. Or Bidet! Who knows cuz I missed it! :(