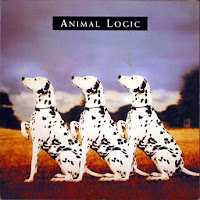 Every now and again, I rediscover Animal Logic. They aren't a band that I think of often, although I had the cassette tape in extremely heavy rotation my last year of pharmacy school (1994-95.) I was late arriving to them, although "There's A Spy (In The House of Love)" was a mild radio hit during my senior year of high school. I remember my friend Kelly giving me the tape on a trip to Chicago - her brother or someone worked at a radio station and had one of those FOR PROMOTIONAL USE ONLY - NOT FOR RESALE copies of the tape. She thought I would like it because it reminded her of Carly Simon, an artist whose music I was enjoying quite a lot at the time.

I liked "There's a Spy..." enough, but I never really got into the album - I'm not sure why. But by the time 1995 got here, I was totally ready for it apparently. I couldn't get enough of it - especially the jaunty little "I'm Through With Love" with its clever little lyrics describing the singer's bad experiences in relationships ("a burning torch I'm carrying against my will" is one of my favorites!) And at a concise 38 minutes, it is just the right length - a refreshing contrast to today's bloated albums that feel the need to fill up the 80 minutes of a CD just for the sake of being able to do it.

I just love Deborah Holland's voice - it's soaring yet understated but always clear and beautiful. Their music is difficult to categorize though -- is it pop? Kind of, but not quite. Is it jazz? Not really, because it's too poppy. Perhaps that's why I like it so much, it's a bit of an amalgam of a jazz and pop without being that dreadful smooth jazz that I so dislike. Her solo work is not really in the vein of Animal Logic - she has some mp3s posted on her web site, and while I like them, it's just not Animal Logic.

It's a pity that they never really broke through to mainstream success, although with the sound they have, they really had an uphill battle at the changing face of radio at the end of the 80s. Pop was on its way out and there certainly wasn't space for jazz/pop fusion as rap made more inroads and grunge was just around the bend. They recorded a second album called II which I never saw in stores and was, unfortunately, out of print by the time I was listening to the first album constantly in 1994. I managed to snap most of it up on Audiogalaxy, but alas, not all of it. I have never listened to it as closely as the first album, but perhaps I will listen to it in bed tonight.

As I mentioned, II is out of print, as is Animal Logic, but both are available used on Amazon for very reasonable prices. I'd recommend picking up the first one for sure. The second one is a bit more hit and miss, but the first is an essential component of the soundtrack of my life, even if I don't think of it all that often.