Someone is obviously channeling Evanescence on their latest album cover. 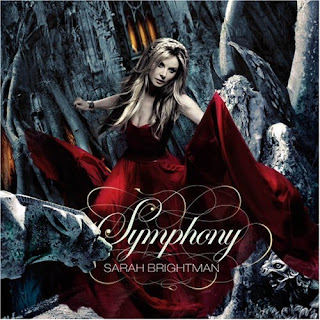 Wow, could this cover be just a titch more dramatic? Although Sarah Brightman is quite pretty, she looks like she could sink her fangs into your neck at any given point.

The album itself is a bit of a mixed bag. I love "Fleurs du Mal" for the same reason I love the album cover. Plus Sarah Brightman, despite the fact that she is best known as the voice behind Christine in The Phantom Of The Opera, has undeniable vocal prowess and the ability to sing the hell out of a song without beating it into submission. But still, a little Sarah goes a long way with me.
Posted by Dan at 1/30/2008 04:14:00 PM

Uh, when did Amanda Carrington run away from Dracula's castle?

I was thinking something similar! Jeff, I'm presuming that's you because you're the only one I know that would make an Amanda Carrington reference!!

I think the next frame is when the bats fly out from under her skirt! D'oh!

The title song of that CD is not bad- big ol' Sarah ballad.