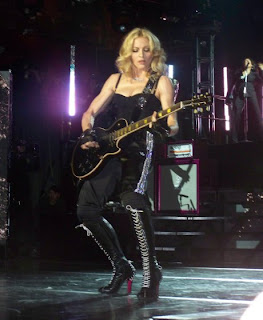 ...but don't dare say that her sugar is raw.

For the fourth time in seven years, Jeff and I are headed to see Madonna play live on the Sticky & Sweet World Tour. This time around, we're not jetting off to someplace exotic but rather, we settled on trying to get tickets to her Chicago show at the United Center on October 26th. Since Jeff is a teacher, it was really the only show he could realistically go to. Jeff getting time off work is not exactly the same as me putting in for the day off and using vacation time. He'll probably have to use one of his personal days for the day after the concert (Monday.)

Wait a second, tickets aren't even on sale until Saturday? What gives?

Well, via Jeff's brother-in-law, we found out that you could get in on a presale if you have a Citi card. Since our souls are forever enslaved to Wells Fargo, the only credit card we have is a WF card. Jeff, however, had a Citi card. He gave the necessary digits to Heidi who, dutifully, at 10AM on Tuesday morning, logged on to Ticketmaster and bought the tickets for us. So we're going! Again! To Madonna!

The last time we saw Madonna in Chicago was on the Drowned World Tour in 2001, when Heidi was wildly pregnant with Anna and came down in a cab to pick us up from the arena after the show. We were in the rafters for that show--seriously, there was nothing above us but ceiling as I am fond of saying. This time, however, we have MUCH better seats. They are in section 208, row 6, seats 1,2 and 3. Every other Madonna show we have seen, we have seen from the right hand side of the arena. Not so this time! Take a look.

We're pretty much going to face the stage head-on! And the best part? The tickets were "only" $165 a piece. While still a small fortune, they are nearly $100 a piece less than my Confessions Tour tickets, and the seats we have for the Sticky & Sweet Tour are comparable to the ones we had for the Confessions Tour. So this is a good thing and plus we can wave at the poor saps that will be sitting in the seats we had for Drowned World.

So why did you buy three tickets when there are only two of you going?

Well, that's the other bonus. My good pal and Blogger buddy Yuri is flying up from Florida with his wife to meet up with us and attend the concert as well! He and his wife are going to make a weekend of it in Chi-town, while Jeff and I (and hopefully Heidi and Anna, if I can talk them into it and we can save the money for all of us to go) show up probably the day of the concert. So I'm looking forward to meeting up with him and hanging out and discussing all things Madge related. Ain't the internet grand, folks?

So, yes, Heidi is a saint, for taking time out of her all-writing-all-day day yesterday to buy the tickets for us. But that's not all! She also must have read my post the other day moaning and groaning about the piss poor quality of the Hard Candy tracks that I bought from iTunes, because I got home from work last night and what do I see on the table but the Hard Candy CD picked up from Best Buy. She is still not sold on the album. Granted, she has not really heard all that much of it but Jeff and I have been going on and on about the "my sugar is RAW!" part on "Candy Shop." I played just that part for her last night and she was decidedly not impressed. I believe that her exact quote was "God! That's like a booger in my ear!" That's kind of what I thought when I first heard it last summer, but I have since come to really like it, mostly for the campiness of the "my sugar is RAW!" line.

I have only a little bit of nervousness regarding the tour, and most of it comes from the fact that I am still not as hot on the album as I was on Confessions. I know that it's not fair to compare Madonna's new work to her past work, but for me it is impossible not to. I have a feeling that the set list will be heavy on Hard Candy and light on the old stuff. It could be very Drowned World Tour in that respect (although I swear if she trots out "La Isla Bonita" one more time...) The other thing that makes me a bit nervous is that by the end of October, the weather starts to get a bit dicey which makes travel interesting. Oh well, we'll just hope for the best and not court trouble.

So once again, Heidi proves to be the best wife ever. Not surprising.

I would so marry Heidi if

a) I dug girls
b) She wasn't married to you, you lucky "dawg"

Maybe she could be my beard, whatever that means...

I so wish i was coming to madonna with you. Sounds like heaven. With Yuri! boo to boring cardiff :P

Paul, I would be your beard anytime!

Thanks, Heidi, for taking care of the tickets and parking. You are the wo-man!

This is going to be a great trip!!!

Love Heidi's comment about Candy Shop (or Ye Olde Candy Shoppe as I call it). I am with her on that.

I know ya'll will have a great time in Chitown. Am sorry I am not going to be there!

Great post, yo. I picked up Hard Candy for Laura (my wife) as a sort-of-mother's day present.

We're, um...in Heidi's camp on this one. We like 4 Minutes, but the rest of it has yet to even begin to grow on us.

I'm sure you'll have a blast. There's nothing like a concert road trip, methinks.