We had nothing to be guilty of

This weekend has been a whirlwind of activity that I may need another two days to recover from, but I wouldn't trade it for the world. On Saturday, we went down to Indianola to get Jeff and take him on a, as Annie Lennox might say, who-knows-what-we'll-get-up-to day. Heidi did a very good recap of the entire day, but the bottom line was this: We dressed up as Barry Gibb and Barbra Streisand from the Guilty album cover. I swear to God, it was her idea! (although I'm sure that no one believes me.) 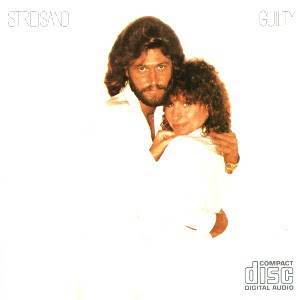 The new and (not) improved: 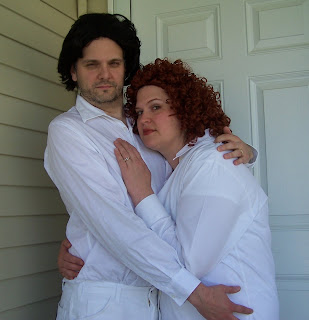 For the record, I make the worst looking Barry Gibb EVER. But we had fun doing it and now we have a costume guaranteed to take some sort of prize at The Garden's costume party this year. I think we wanted to go to that last year, but illness forced us to nix that idea.

The funniest part of the whole thing was when we were getting gas on Saturday morning before heading down, we got into a minor fender bender as a lady backing out hit the back end of our car. There was no damage, just a little of her paint on our car, but there we both were, dressed in white from head to toe. She probably thought we were angels, or, as Caryle said, headed to a Mormon baptism.

A part of me was disappointed in myself on Saturday, for even though we were all being ridiculous and silly, I found it hard to completely let go and not give a shit about what people were thinking. I think I will be working on that for quite some time to come, but it is all about letting the kid come out and play.

So yeah, never in my wildest dreams did I think I'd marry a woman who would reenact the Guilty album cover with me. It's why I know that I will never be bored with her.

We also got a Wii today, although it was technically an early thing as a Wii (along with Mario Kart) is a bribe reward for Anna to work through and give up something very near and dear to her. She has to go seven days without it, and after seven days, she can play it to her heart's content, although said given up object cannot be resumed after that. It's hard for her, but she's a trooper and doing a good job.

How cool! I saw the pic first on your last.fm site and was like...'Attention Disco Citizens!'

I am addicted to Wii bowling! I sure you guys will get swept away with Wii-mania! We should have a Wii Bowling Tournament one of these days. :)

hahahahaha that is too funny. first i thought you had converted to mormonism - you have to wear all white in the temples! Your Barry Gibb hair is probably more real than barry gibb's hair!

Oh god that is fabulous!

Did I tell you about the time I dressed as Amy Winehouse last year? It took lots of wine for me to bring up the courage to walk into the party so I know exactly what you're talking about when you mention letting go/loose.

You got a Wii! This is great news. Hopefully you're online with your Wii. We could totally race, dude.

Next time I've got the Wii on, I'll find my 'friend' number.

I have to investigate these friend Wii codes. I know of them in the abstract, but beyond that, it's beyond my current level of comprehension. All I know is that Anna loves her Mario Kart. And I got my ass kicked at Wii Bowling by my 6 year old.

I actually thought you'd converted to ABBA-ism! That's so rad, and looked like fun was had by all!