OK we got 4+ inches of rain in the last 24 hours. Normally, this wouldn't be a big deal, but we have had nothing but rain this spring, on top of all the snow melt from the winter. The ground is pretty much saturated because of this, the Squaw Creek and Skunk River are going over their banks and expected to crest well above flood stage sometime overnight tonight.

To that I say, holy God, the water is high enough as it is!

We are lucky as we are not in a low-lying area, but a lot of Ames is right in the path of this water. Rumors swirled all day at work about which streets were closed and what businesses were underwater. There was much talk of a repeat of the floods of 1993 when Hilton Coliseum had 14 feet of standing water in it and much of the city's roads were impassable for the majority of the summer.

Anna and I were not to be deterred. We wanted to see this stuff first hand, but it was clear that a car was not the way to go. So we got on the bike and headed out. Our first stop was Brookside Park which is just down the street from or house. Bear in mind when you see these pictures, the park is in a MUCH lower lying area than we are, so we are in no immediate danger. 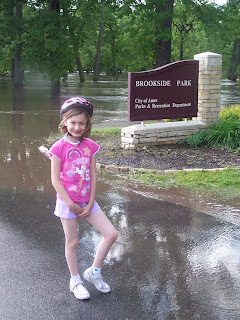 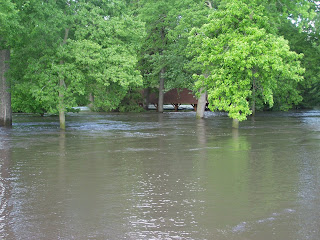 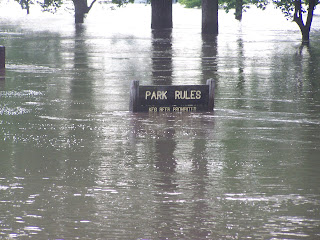 It was all pretty amazing folks. During the floods of 93, I was living in Carroll which sits at the top of the divide in Iowa, so flooding was pretty sparse there. To think it was worse then boggles my mind.

Next stop was South Duff Avenue, which is where most of our retail stores (Target, Best Buy, Wal-Mart, etc.) are located. This flooded like the devil in 1993 and according to some people I talked to down at the scene, it looked much like it did today back then. The most impressive flooding is in the Target parking lot. We couldn't get much further than that because of the water. 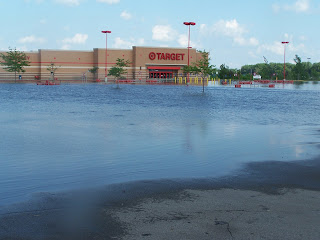 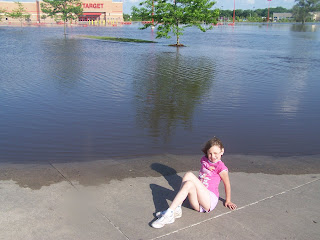 Anna poses on the beach next to Lake Target.
So impressive is the flooding down on South Duff and at Target, it prompted Anna to lament "Poor Target!!" as is evidenced in the following video.

We were not completely unscathed by flooding. The Nerdery, being in the basement of the house, had extremely wet carpet this morning, which has resulted in us using the Shop-Vac quite a bit today. The carpet is still damp but it's shitty carpet anyway, so I'm not too concerned. The Sex book had a near death experience, as did the Stoney End vinyl album, but both emerged unscathed.

So hopefully the waters abate. No rain in the forecast for the weekend, so that's a good thing!

Wow. I have never seen flooding like that in person, though Georgetown and Old Town Alexandria sometimes flood. Yikes!

You sound fatherly in that video!

Anna's "Lake Target" beach photo is a hoot! Love that! And I'm glad the Sex book survived to see another day.

Man, is there some Target clause that specifies that they can only be built in low-lying areas?

I can remember gawking at the Target on Euclid in Des Moines (dubbed "Targhetto" by Des Moinesers) during the flood of '93. Metal shopping carts were literally swirling in the currents of that particular Lake Target!

My thoughts go out to the Nerdery and Lake Target. I agree with Yuri, that Anna photo is absolutely priceless.

We had a little hail up here in Woodbury, but that was it. We played Mario Kart like it was nothing.

Well, Lake Target is history and all is back to normal. It's like the nothing never was. The Nerdery is drying out, slowly but surely (although it still smells very musty!) That whole area in South Ames is a flood plain and when Target was built there, they had to haul dirt in to build up the land to protect it from just this very thing.

We also played Mario Kart like nothing else this weekend!

Dan, I'm an idiot. Soft Drink is me. We have an e-mail set up for our casting call for our upcoming short film thing. I forgot to switch over to me when I left that comment.

No worries, Thomas. I figured that was you! Although I was confused by the whole "soft drink" thing. I was certain that you were going to change your blog title to "Soft Drink."