Not the least bit Suspect

I am off work today preparing to work the weekend but am also down for the count with a doozy of a cold. Not the "oh my God I'm so sick"-type cold, but the "prone to random sneezing fits, post-nasal drip"-type cold. So I took advantage of the time and used it to watch a movie that had just recently been brought back onto my radar - the 1987 Cher/Dennis Quaid film Suspect.

I had not seen Suspect in forever - I think it was the early 90s when I rabidly watched all of Cher's movies in a week or two - so I remembered nearly nothing about it. I remembered that Cher was a lawyer, that Dennis Quaid was a juror and that there was a murder trial and that Cher and Quaid's characters worked a little too closely together than a defense lawyer and a juror on said defense lawyer's case should be. But that was it. 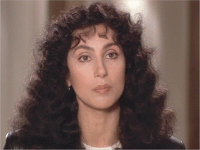 The movie itself has aged quite well. Cher is very good in it, but she is Cher and not Madonna. Say what you will about Cher, but she took being an actress very seriously. There's still an element of "oh that's Cher" that she can't quite shake but she does a better job of it than Madonna ever did in most every movie she ever did. I think that Suspect is probably the best she ever did of disappearing into a role, with a close second being her turn as Rusty Dennis in Mask. And Cher is beautiful in this movie as well. I am pretty sure that even at that point in the 80s, she had been altered by the plastic surgeon's knife, but it is much more subtle than what she has now. The beauty at least appeared more natural.

The movie reminded me of how Cher really squandered her acting career on the Lori Davis hair care infomercial. There she was, Best Actress Oscar winner for Moonstruck (which I still think was the "oops! we screwed up!" Oscar that she should have gotten for Mask), and she decided to do an infomercial that became the butt of jokes for years to come. I don't think she has really had a credible movie role since then - certainly no starring role.

Oddly enough, I found myself obsessed with Cher's handwriting in the movie! Liam Neeson (who plays the man she is defending in the case) is a deaf-mute so consquently, she has to write on paper and blackboards and other such things. I was always thinking to myself "OMG! That's Cher's handwriting!" And it wasn't like it was a handwriting double because you saw Cher write it! Crazy, but that's how my brain works.

Ms Cher has very good penmanship - and the type your English teacher had. I noticed it too.

For the edification of your readers, I AM Dennis Quaid minus the collusion or whatever it is called! And minus the abs. I was just on a jury in the courthouse they shot the movie in (bar the courtroom, which was an accurate soundstage). The details are very good in that movie. For instance, her office has a Natl Building Museum poster. I ate lunch at the NBM everyday on breaks from the trial - it's across from the court. Even her apt was a real apt in DC, not a studio set.

She looks very normal in it. The only time I had a sense of Cher The Star was in the scene where she's being chased in the basement amongst the bars. I thought her hair looked more rock'n'roll in that sequence.

This is all true! XO served as the inspiration for the rewatch of Suspect. I am nothing if not suggestible. Heidi will attest to that.