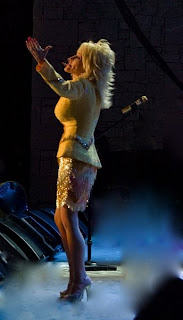 Happy 63rd birthday to the first lady of country music, the one and only Dolly Parton! It's hard to believe she is 63, and judging from the two times I saw her in concert last year, she is one of the hardest working 63 year olds I can think of! My fascination with Dolly and her music has been there for as long as I can remember, and although she's had some missteps along the way, she is still one of the most thoroughly entertaining performers I can think of. She is, as RuPaul would say, the total package.

So in honor of Dolly's 63rd, I have done up a list, Thursday 13 style, of my 13 favorite Dolly songs. Links to streams (if there are any) and a couple videos thrown in for good measure. As always, in no particular order (except for maybe #1)

1) Potential New Boyfriend (from Burlap & Satin)
If any Dolly song is an untapped gay anthem, it is this one. It is, hands down, my favorite Dolly song not written by Dolly. A great chorus and bridge and a great line in "twisting my ignition key, turned my motor on." Pure camp from beginning to end and I love every second of it. Desperately DESPERATELY needs to be remixed for the clubs.

2) Baby I'm Burnin' (from Heartbreaker)
My favorite disco-Dolly song. First heard this on the Dolly Live in London concert on HBO that I watched over and over again back in 1983 and was probably the source of all this foolishness in the first place. I would pay good money for a copy of that concert now.

3) Tennessee Homesick Blues (from Rhinestone)
This is the song that plays over the opening credits of Rhinestone and is the only watchable part of the entire movie. It also includes the GEM of a line "Daddy you can load the rifles up/We're gonna load them dogs on the pick-up truck/And head up to Calhoun county/And catch us a coon." DEAR GOD.

4) Jolene (from Jolene)
A classic Dolly song that she never seems to get tired of doing. I particularly love her take on it on the Live & Well CD in which the lyrics are changed to "Your smile is like a breath of spring/Your voice is soft like summer rain/And I cannot compete with you/Drag queens."

6) 9 to 5 (from 9 to5 and Other Odd Jobs)
A very cliched choice, but it's a great song. I still can't get over the genius of rhyming "kitchen" with "ambition." It was probably the first Dolly song I ever heard and is forever linked to the movie of the same name which is in my Top 5 favorite movies of all time.

7) Light of a Clear Blue Morning (from Straight Talk)
There are a couple versions of this song, but the one I like best is the one from the Straight Talk soundtrack. Similar to "Tennessee Homesick Blues", it plays over the opening credits while Dolly's character is driving into Chicago. I can't drive into Chicago without thinking of this song.

8) Romeo (from Slow Dancing With The Moon)
Dolly and her flying buttresses (including a then red-hot Billy Ray Cyrus) make this song reek of 90s country, and I like it in spite of that. A very fun video as well.

9) Two Doors Down (from Here You Come Again)
There is a version out there of "Two Doors Down" that is apparently much more country and much less pop-oriented than the one that is famous, and what I wouldn't give to hear it. It only exists on early vinyl pressings of the Here You Come Again album, so chances are slim that I will ever hear it.

10) Down From Dover (from Little Sparrow)
As I have said before, it's the best baby-born-dead song ever. Rerecorded for Little Sparrow with an extra verse that was omitted from the original, it has heavy Celtic influences and wrings every bit of sorrow out of the music as is humanly possible.

11) Marry Me (from Little Sparrow)
Seriously, Dolly's bluegrass renaissance in the late 90s/early 00s gave us some of the best albums of her career. Her songwriting was top-notch again and some terrific bluegrass covers also resulted from that period. "Marry Me" is probably my favorite Dolly original from that time period.

12) Coat of Many Colors (from Coat Of Many Colors)
You just can't beat a classic, and the story of Dolly's multicolored coat that she wore to school only to have everyone laugh at her is a part of the Dolly legend. Although from the sounds of it, it's all true. Also adapted into a children's book that I read to Anna a lot. What's next, "Down From Dover"? ;)

Honorable mention goes to Dolly's bluegrass cover of "Stairway To Heaven." Robert Plant actually approved of what she did, but more importantly, it was the song we used to lull baby Anna to sleep back in her infancy. Hey, at least it wasn't "Down From Dover"!

And here's a couple pictures I desperately wanted to fit into the post, but couldn't! 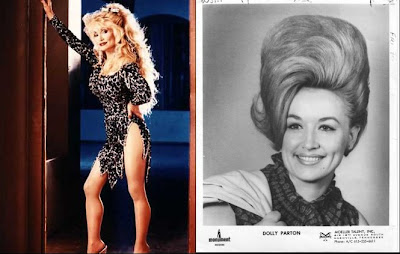 I think it must also be said that in addition to her amazing talent for singing and song-writing, she's also got a great rack.

I had no idea you were this big a fan! I love Tennessee Homesick Blues.

And did I tell you that as a child i thought Here You Come Again was a religious song about Jesus? I thought it was "He'll come again..." so the next line about his body confused me a bit. I EVEN like The Gayken's version.

Mary, I deliberately did not mention Dolly's rack because I knew you would! Thank you! ;)

Steve, the Dolly love runs deep here. It is not really something you would expect based on my other music tastes, but the woman is an amazing talent!

I love Dolly's dimples in that early press pic.

I will always wonder what her face at 63 would have looked like had it been untouched by surgeons' hands!

Great post, Dan! Dolly is a legend, and her show was fantastic. I think it's great you got a chance to see it not once, but twice! I marveled at how agile and in good shape she is for her age. Sure, it was not Madge-tastic choreography going on, but she was playing her guitar, singing, and working the crowd. I'm sure I would have passed out before the intermission! Kudos to her.