She works hard for the money 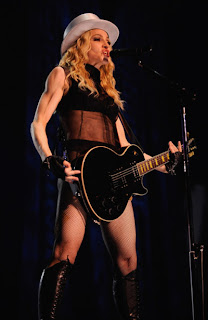 I am in SHOCK that Madonna is hitting the road again this summer (in Europe) with an extension of the Sticky & Sweet Tour.

As much fun as the show was, if it were to reappear in the States, there is no way I would pay that kind of money to see the same show again. Not no way, not no how.

I can only assume that her hauling herself back out on the road means that she either a) knows where the money is to be made these days or b) is over a barrel at Live Nation, with them putting the screws to her saying "get out there on the road!" I think it is probably a combination of both, but I have to say that I am disappointed that this is happening. The whole Hard Candy era is one best forgotten soon, and there's really no way that she can concentrate on new material if she is rehashing the past.

What I DO think this means is that this spring will see a rereleased and repackaged Hard Candy (with probably new remixes but no new songs or artwork or anything that would tempt me in the slightest to purchase it) and then a greatest hits in time for Christmas 2009. As I was saying to a friend tonight in e-mail, by Q4 of 2009, there may be no one with money left to buy the hits package! I also wonder what the tour extension will do for the planned release of the DVD. Perhaps she hated how the Buenos Aires dates turned out so much that she's going to try to get a better recording this summer.

I really dislike how much Madonna is repeating herself these days. It has not been this hard to be a fan since the Erotica days when it seemed like she was making bad decision after bad decision. I am still holding out hope for something brilliant.

But of all the tours to extend, why did it have to be this one? Just saying.

I hear ya, Dan! I'm scratching my head, too, wondering WTF with the rehash of S&S

I have a feeling you are spot on about needing the money and being on Live Nation's payroll. And I would not dig a reissue with the remixes we all have anyways. But your idea of the 2009 "plan" to do a repackage and a Greatest Hits by Christmas sounds very current "Madge" right now.

I see exactly what you mean, and agree wholeheartedly. That said, if she comes here I will be so happy she's rehashed the tour again. If not, I'll definitely stick to the "this is a bit rubbish" side of the fence.

I'm not getting my hopes up. Again.

I think she is in the driver's seat with LiveNation. They have completely fucked themselves over with some megadeals that are like Robbie's and Aerosmiths's. She's no one's bitch, is she?

That said, I'd rather she record new music. As she ages, she runs the risk of being a nostalgia act. If she spends all this time prepping another tour, that means no time to record an album in 2009 (I assumed she'd do that and release it in 2010). We'll see... I do bet the tour will go to Australia,but that would really make the best sense in winter here (summer there).