We got up at the crack of dawn this morning to go out to the equestrian portion of the Iowa Games in which Anna was competing. The Iowa Games is, as the web site proclaims, the largest amateur sports festival in Iowa and for some reason, it is always in Ames. I always figured that having an athletic child would be the universe's revenge on me, but despite having more athletic ability in her little finger than I have in my whole body, she seems dedicated only to horses, eschewing most other sports. She has been taking riding lessons since she was in kindergarten. We've been through several different teachers - not because they were bad, but because of the transience that living in a college town will bring to your life. Her teacher over the last year has been Sara Edwards, who has just been fantastic for Anna. She took teaching Anna very seriously, teaching her tack and the essentials of horse maintenance as well as riding techniques. She didn't view this as just indulging a young girl's love of a horse. Sadly, she's leaving as well at the end of July.

She has accompanied Anna to three horse shows this year, all of which were in Ames and the last of which was today. Not only did the show land on the Saturday following a seemingly interminable 8-day-in-a-row stretch at work, but it was also the hottest, most humid day of the year. Even though we arrived at 7:15 AM today, it was already hot, headed for a high of 95 with heat indexes well into the 100s. Nevertheless, we persevered. 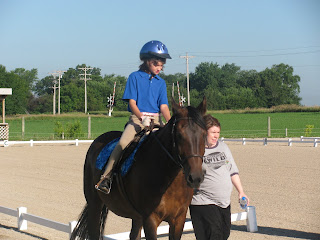 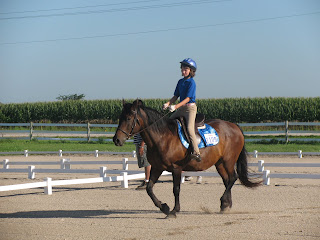 She competed at 8:00AM and 8:50AM and we endured the heat, humidity and blazing sun until around 10AM waiting for scores. When they hadn't resulted yet, we decided to blow the popsicle stand and go eat something. We were all hot, tired and crabby. So we hit Subway and with our blood glucose levels restored, we went back out and got her scores. While she did not place (they only award the top three finalists) I could not be prouder of her. It is no small feat to know how to control an animal like that, and she has about 1/3rd the mass I do. To me, she is amazing. I'm here to tell you I couldn't do that. Heidi and I were talking this morning about how she has this amazing amount of knowledge about horses of which we have virtually no concept. I imagine it isn't all that different from when I was taking piano as a kid and my parents were not able to help me at all - it was my thing, I had the knowledge and they didn't.

So once that was done, I headed into work for an hour to tie up some loose ends from the week and Heidi crashed on the couch. Not long after I returned home, I did the same thing. Anna heard that I was going to go sleep on the couch so she got it ready for me. Here's what I saw when I came in to sleep. 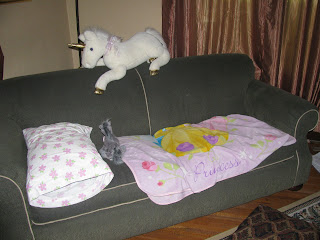 Hooray for Anna! What an amazing job she did at the equestrian show yesterday, and on the hottest day of the summer, no less. Just wanted to let her know how proud we all are of her! :)

Thanks Jason - I'm super proud of her. She just keeps on getting cooler as she gets older.