We took the hour and ten minute drive from Ames to Carroll to see my folks today. My sister Wendy and her fiance Andrew were in town as well, so it seemed like a good excuse to get out of Dodge and get a change of scenery. Heidi edited like a mad woman through most of the trip over, which left Anna and me to our own devices. We listened to Kylie's Aphrodite pretty much all the way through (started on "Illusion" and stopped just before "Illusion" started again. Seriously, "Illusion" is the hidden gem on the album.) I heard her singing along to pretty much every song - as I've said, she knows the lyrics better than I do. Once that was done, we threw Confessions on a Dance Floor on and listened to that. It was Stuart Price fest! I still remember her singing along to this album when she was in preschool, and she still knows the words now. As I so frequently say, stop the paternity test!

But the proof positive came when we stopped in Jefferson at Sparky's One Stop for a pit stop. 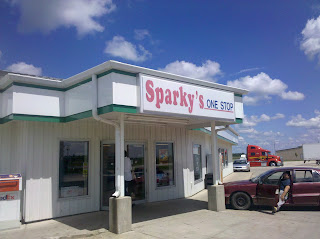 She saw the sign and said "Hey Dad! Look! It's Sparky's One Stop...candy shop."

My heart swelled with such pride. I may not be doing everything perfectly, but I'm certainly doing something right. I totally won the kid lottery.