Ridin' the storm out

We awoke at 3AM today after our bedside lamps turned themselves on. A power surge from a HUGE severe thunderstorm was the culprit. After I shook off my sleep, I looked out the window and I couldn't see a thing. The rain was coming down in torrents and the wind was whipping branches around in a most dangerous fashion. Apparently, the heat and humidity from yesterday had led to the predictable summer storm, only this one meant business.

Amazingly, Anna was sleeping the sleep of the dead through this whole thing. We debated about going to the basement, but in the end decided to split the difference and sat in my first floor office which is just around the corner from the basement stairs in case we had to make a run for it. As we all gathered in my office, Heidi asks me "Did you put the car in the garage?"

Motherfuck. No, I didn't. Because I had not wanted to go out in my boxers and move the car before bed, I had locked it and left it outside. Man I was going to regret it now. Worst-case scenarios floated through my mind. I couldn't see the car, so I was sure there was a branch on it. Where was I going to get 10 grand for a new car? And what if a branch fell on the house? Ultimately, I had to take a step back and, as I have tried to teach myself to do, watch the rollercoaster go without getting in the front car without wearing a seat belt.

Well, Heidi was not too pleased with the fact that I'd left the car out, but turned me down flat when I offered to go out in the tempest and move the car to the garage. What was done was done and we would just have to make the best of it.

As it turns out, my decision to leave the car in the driveway was oddly prescient, because through the lightning, we saw a sight that in the light of day was much clearer. 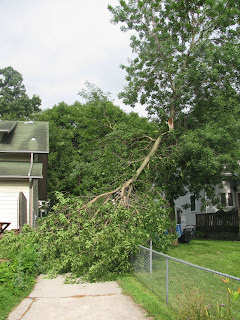 A branch from a neighbor's tree had snapped and fallen from their yard and across our driveway. By some miracle of divine intervention (or whatever), it did not hit our house or damage any of our property, but if I had put the car in the garage, it would have been there for a while. (Update: The branch is gone. Our neighbor chopped it to bits with his chain saw that our driveway was at least passable. He rocks.) 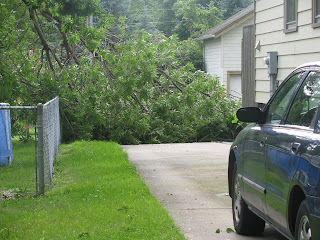 There is a lot of damage in town this morning, and there are still people without power. To have suffered no appreciable property damage and to still have power makes me count my blessings.

My friend Matt (who lives down in Ankeny) was not so lucky - he awoke to this sight from his bathroom window. 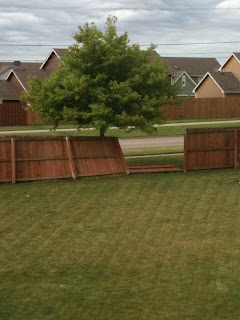 As he so wittily put it, it was either from the storm or the Kool-Aid Man paid a visit.

We'll be cleaning up today. I hear the chainsaws going next door and I really should go lend a hand. It's what Iowans do.

Glad that you and the fam are in good shape, but I'm not sure which is worse...the storm, or having Kevin Cronin stuck in your head.

Yeah, sadly, it's still in my head!