Heidi and Anna have made it a summer mission to collate all the photos we took from our westward vacation last summer and put them into some semblance of order. They've even been scrapbooking some of them - complete with text and cutesy little stickers and what not. Over the weekend they were working on the Grand Canyon page. It reminded me of how I heard more than one person say, right before they snapped a photo of someone, "now everyone pretend like you're having a good time!" It made me feel a bit bad, but honestly, it could have applied to us slightly that day as Anna was kind of crabtastic that day. Still, the canyon is amazing and one of many things that the pictures just don't adequately represent.

I made it through three 50+ hour work weeks relatively unscathed. I'm still trying to catch up on my sleep though, which is proving to be more difficult than I thought. To sleep through the night without waking up would be a blessing.

I am so stalled out on reading, it's pathetic. A 200 page novel should not take 4 weeks to complete! And it's not that it's not good, it's just that my priorities (and my focus) have been in other places. This week though, I'm going to finish at least two of the books in my to-be-read pile so that I can have some decent book blog posts next week. Or maybe even later this week. We'll see how it goes.

Everybody we know is getting married this fall. Well, maybe not everyone, but we have three weddings to attend between now and the end of the year. Our friends Jan & Sarah are getting married mid-September. A week later, Heidi's brother, Hans, is tying the knot with his long-time fiancee Alicia. And then on the last day of the year, my sister Wendy is getting married to her fiance Andrew at the Englert Theater in Iowa City (the place where I saw Evita not once but FOUR TIMES. It used to be a movie theater, but has been restored to its former glory.) We'll pray for no snowstorms for that one or, frankly, for any of them. Hurray for expanding families!

The blog roll got a its first new addition in a long time over the weekend - popsublime, written by my friend Jason. He doesn't blog often (about once a week), but when he does, it's a long and thoughtful entry that is amazingly well written - something that seems increasingly rare in the blogosphere these days. Plus, he and I are musically twinned. I'm always unduly excited by massive amounts of musical overlap!

We'll be hosting our friend Cate from Canada - a beta-reader for Heidi and LJ friend - for a couple weeks starting next Wednesday. Plans are being hatched to head to House on the Rock (a truly Midwestern experience) for one day of it, but other than that, no concrete plans exist that I know of, other than to just have a good time. We're eager for her to arrive.

It's haircut day for me today, and even though it's been eight weeks, I did not spend yesterday cursing my hair. It definitely needs it, but I think it's because she cut it SO SHORT the last time that eight weeks of growth just isn't what it used to be. I'm thinking of going a little longer this time as we're heading out of summer and I have an inkling to straighten it again the next time I go in. We'll see.

Speaking of summer, I'm over it. As I mentioned in my mowing rant from the other day, if it's not raining, it's humid and perfectly miserable outside. After the winter we had last year, I can only come to one conclusion: We're being forced to choose between, as Eddie Izzard would say, fantastically hot or fucking freezing.

But before summer ends, we have to make the annual pilgrimage to Adventureland in Des Moines. My work offers discount tickets which cuts the admission price nearly in half and, as Anna told me the other day "it's kind of a tradition that we go to Adventureland!" Adventureland, as I have said in a previous post, is like an old comfortable shirt that you pull out a couple times a year and know that it'll fit just right. Minor tweaks happen each year, but mostly, it's the same experience year after year which in this day and age, is very comforting. We'll see just how much I can ride this year or if I'd just be better off waiting in the car.

I don't get Robyn. I just don't. Revoke my pop chyldren membership card.

And with that, it's time to do bills and other fun life stuff. But here's us at the Grand Canyon last year, only kinda sorta pretending like we're having a good time. It was also my 37th birthday. 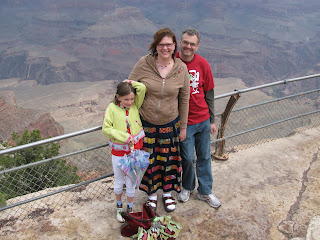 Re: books - i have just whizzed through two (A girly teen book called Withering Tights and a book i think you would love called Will Grayson Will Grayson by David levithan - it's a really touching gay/non gay coming of age story. Check it out) but have stalled on my most recent. It's not that i'm not enjoying it, it's just i keep getting distracted, then forget what has happened. It really deserves more attention than that...

Re: weddings - yeah, all mine are happening this summer. it is costing me A FORTUNE!!!

Thanks so much for your kind and thoughtful shout-out about my blog, Dan! I really appreciate it. And that's a GREAT family photo of you and Heidi and Anna at the Grand Canyon.

Paul - I need to check out Will Grayson, Will Grayson - it's at the Ames library (I about fell over dead because they actually had something I was looking for.) Thanks for the tip!

Jason - you're very welcome. And thanks for the compliment on the photo. Doesn't Anna look kind of crabby in that picture though? ;)