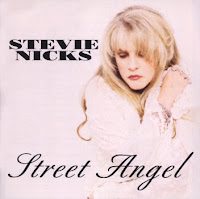 Last week at work, I was on a huge Stevie Nicks kick. I listened to her pretty much non-stop all day long, catapulting her up over a hundred plays this week on my last.fm page. I listened to almost everything of hers I had on my iPod, listening to 5 of her 6 solo albums, even playing Rock A Little twice. The only album I didn't manage to listen to was 1994's mess of an album, Street Angel.

When writing about Street Angel, I'm reminded of that scene in Straight Talk where Dolly Parton is talking to James Woods about the book he's writing. She asks him what his book is going to be about and he lists off this litany of awful things - corruption, greed, etc. She says to him "Why don't you write about something you love rather than something you hate?" That's kind of how I feel about this post, although "hate" really is too strong of a word for how I feel about Street Angel. Rather than hate it, I mostly feel sorry for it because contained therein are glimpses of what might have been. And really, if we don't look at our favorite artists honestly and recognize them as human, capable of making missteps, we're not doing them (or ourselves) any favors.

Five years had passed between The Other Side of the Mirror and Street Angel, and Stevie's life seemed to be a mess, although we didn't know the half of it at the time. There was a Fleetwood Mac album-of-sorts (Behind the Mask), her hasty departure from Fleetwood Mac in a fit of rage, a best-of album that had her singing songs written by Jon Bon Jovi and Bret Michaels and a few one-off soundtrack cuts from things like "Party of Five" and Boys on the Side. So to say it was a dry period for Stevie Nicks fans is putting it mildly.

I first heard of Street Angel through a fellow Stevie Nicks fan I met on the ISCABBS back in the spring of 1994. He lived in Boston and went by the online handle TheWildHeart. After talking online for several weeks, he offered to share with me a bunch of rare Stevie tracks with me. So I sent him a cassette tape and a couple weeks later, I got not one cassette tape full of Stevie rarities, but TWO. I still have those around here somewhere, although I managed to find most of those tracks on Napster & Audiogalaxy during the Wild West days of music on the internet. He had offered to send me tracks from the new album, but I chose not to have him send them. Rather, I decided to wait for the album. Those cassette tapes, along with Basia's The Sweetest Illusion, really define the last few weeks of that school year and as the semester wrapped up, I prepared to go back to my folks' house to work over the summer break.

A week or so after I arrived back home, I got a postcard in the mail (how, I'll never know!) that was a promo for Street Angel. It had this image of Stevie and I was horrified. 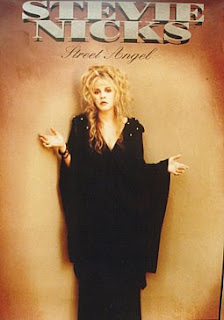 What happened? Where was the wonderfully curvaceous Stevie that I had come to know and love? She looked like death warmed over in this photo. I thought, surely her health must not be great. Stevie's weight had always yo-yo'd around a lot, but this was ridiculous! Still, I eagerly awaited the album, which came out the first week of June 1994 - right around my birthday.

Much like I did with The Other Side of the Mirror, I tried to talk myself into liking it. It's not hard to do when it's a long-awaited release by a what amounts to a core artist in your listening habits, but there was something niggling at the back of my brain. "This isn't that good..." it seemed to say. "Stevie really doesn't sound like she's even there." And as it turns out, it was true. When the album was in production, Stevie was back in rehab, AGAIN, this time trying to kick the Klonopin habit that had started with her finally and completely kicking of the cocaine habit in the late 80s. Stevie's songs and voice are pretty much the only thing authentically Stevie on the album. The production, the album art, everything else has the feel of something cobbled together by committee. I swear that given the opportunity, even with the limited technology of the day, I could have come up with a better album cover than what the record company did! What's contained in the album is nearly as amateur. There's an ill-advised cover of Bob Dylan's "Just Like A Woman" and an obtuse song about Jane Goodall. The production is very generic and blah - living up to neither the acoustic greatness of Bella Donna or the synthy-goodness of Rock A Little. As an album, it fails, completely and utterly.

But all is not lost. I've been listening to this album while I write this post and there are several good songs. Not surprisingly, many of them are songs written by Stevie for the first three albums and ultimately rejected for whatever reason. The first time I listened to the song "Greta" I had what basically was a deja vu moment - it sounded just like classic Stevie, complete with the spoken "Oooh, she's got a movie star view..." moment. Well, "Greta" was originally recorded for The Wild Heart - no wonder it sounds like 80s Stevie! The "Greta" demo from that time period is circulating on the internet and is astounding for both its similarities and differences to the version that eventually ended up on Street Angel. Lyrically, it's pretty much identical, but the 80s version is faster and has an 80s groove that is notably absent on the Street Angel version.

Another standout is one of my favorite Stevie tracks, "Blue Denim." (embedding disabled? Seriously!?) A classic Stevie rocker co-written with Heartbreaker Mike Campbell, it kicks the album off in fine form and was even released as the second single. Even though Stevie does sound a bit bored through parts of it, singing the "blue grey eyes they change with the color" chorus in practically a monotone, there's a urgency in the song that even Stevie's Klonopin use couldn't douse. By the time we hit the last minute of the song and she wails "Yes I'm going away for a little while to remember how to feel!/And if I find the answer, I promise you/I'll come back and get you," you can just see Stevie on a concert stage, her chiffon dress billowing out as she twirls as only Stevie can. She hit the talk show circuit to promote "Blue Denim", appearing on David Letterman with a crimped hairdo and very overweight - so much so that upon viewing it, she vowed to retire unless she could lose weight.

An aside - Stevie has been criticized for her weight for the better part of 30 years, but the biggest problem for her is that ANY extra weight on her 5'2" frame is going to be noticeable. Someone like me that has the benefit of a 6'2" body has A LOT more places to put the extra weight, but Stevie's just not that lucky. And I never thought she looked bad during the Street Angel years, weight-wise. She certainly looked better than she did during the first Clinton inaugural. Combine that with seeing that shocking picture of her on that promo postcard, I was glad to see that she wasn't at death's door after all, although there's no doubt her weight at the time was not particularly healthy for her. During high school, I was always so worried about Stevie, that she would suffer a premature death from a drug overdose and I would be teased mercilessly by kids at school because I made no secret of my Stevie fandom. Fortunately, I never had to endure that and won't because the chances of her ODing are pretty much at zero these days.

But back to the music. Even lesser songs like "Maybe Love Will Change Your Mind" and the title track have aged better than they should have. But most of the rest of it is a forgettable train wreck. It's a train wreck like only Stevie can do it and because it's Stevie, it's still moderately listenable for me. As I said earlier, I have been listening to it while I write this post and at several points, I've had to stop and ask myself if I'm being too hard on it. Well, as a friend of mine said to me once, "Don't kid yourself, Dan. That album is ASS!" And yeah, for the most part it is. It is on par with The Other Side of the Mirror and doesn't hold up even remotely when compared to Bella Donna, The Wild Heart and Rock A Little. Clearly, when given a choice between the two, the cocaine was a better muse for Stevie than the Klonopin, although I'd prefer she had neither.

It wouldn't be until 2001 - seven years later - that we'd get another solo album from Stevie Nicks. Finally free of the grips of Klonopin and reinvigorated by a reunion with the classic Fleetwood Mac lineup, she produced an album that deserves a spot in the Stevie Nicks canon next to the triumphant first three albums, something Street Angel can't even come close to claiming. In fact, after listening to so much Street Angel this morning, let's all cleanse our palates with "Blue Lamp."

Street Angel is a good album. It has some solid song melodies, and although it's not her best it is much better than The Other Side... save for Rooms On Fire. Unconditional Love is one of my favorites on Street Angel. That's a good song also. Street Angels has its weaknesses, but it is so autobiographically right on that it's like reading her diary of that period of her life. Just my two-cents.