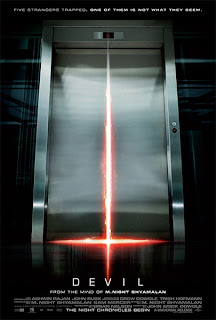 I've gotten to the point with M. Night Shyamalan that I simply don't trust him any longer. The Sixth Sense was great, Unbreakable less so and pretty much everything since then has been quite awful. I kind of liked The Happening in spite of myself - something about malevolent plants just really turns me on. So when I heard that Shyamalan's name was attached to the film Devil, I mostly just wanted to roll my eyes and move on without even dipping my toes in that pool. But last week it rolled into the dollar theater here in town and for $1.50, I couldn't resist.

Originally I was set to see this movie tomorrow night with a couple of other guys but one of them had another commitment and the other had the ironclad excuse of it being his wedding anniversary. So it looked like I was on my own for this one. That's okay - I'm not averse to going to movies by myself. I don't do it often and that's mostly because without the incentive of meeting a friend at the movie, I will usually give into inertia and just decide to skip the whole thing and stay home. For perspective, the last movie I went to on my own was Cloverfield.

But when I really want to see something, I can overcome that inertia and that's just what I did tonight. It helps that it's October and I was really in the mood to sit in a theater at a scary movie. Devil promised to deliver just the right amount of chills. The basic premise is quite simple. Five apparently random people end up trapped in an elevator in a downtown Philadelphia skyscraper. One of them just happens to be Satan himself. The set-up of the movie describes this as "the devil's meeting" - a South American legend in which the devil takes human form to punish a select group of people on Earth before claiming their souls. His entry into the world is always preceded by a suicide and so, naturally, Devil opens with someone falling out of a building and on to a delivery truck.

If I were only able to say one thing about Devil it would be that it plays like a long episode of The Twilight Zone. It never really delivers any true scares. There were a few jumps here and there, but, much like Paranormal Activity, it settled for creepy rather than scary. I felt like this was a good trade-off because with nearly all of the action taking place inside an elevator, it just wasn't a good set-up for honest to God scares. I found the story of "the devil's meeting" and the slow reveal of the components of the myth and their subsequent incorporation into the movie to be particularly well done. In addition to the events inside the elevator, there's an interesting side story of a Philadelphia police officer whose loss of his family to a hit-and-run driver nearly caused his own demise from alcoholism which fits like the last piece of a jigsaw puzzle.

What I liked about Devil is that in this day and age of torture-porn horror films, it dared to be subtle and different. Yes, there is some gore, but most of the deaths occur off-screen which simultaneously heightens and lessens their impact. By doing this, it plays to one of the human brain's greatest strengths - the ability to imagine. What we come up with in our minds for what's happened when the lights go off in the elevator is much scarier than anything that could be put on film. It's refreshing to see a horror film that tries to scare with concepts and ideas, rather than gushing blood and decapitations.

Like I said, I didn't find Devil especially scary, but it did make me think which was not what I was expecting from a movie like this. I also had feelings for the characters, whether it be the people in the elevator that I mostly loathed because they were depraved human beings or the cop whose loss of his family affected me more than I thought it would.

This will be a movie that's shown on cable a zillion times. If late night TV were still running movies instead of infomercials, it'd be a new staple. It was definitely worth the $1.50 but then again, most movies are. The only movies I've ever seen there that were probably not worth the admission price were Silent Hill (people actually booed at the end of it) and The Mummy: Tomb of the Dragon Emperor. It wasn't as good as the best horror movie I've seen for next-to-nothing (30 Days of Night) and had nothing on the fantastic-ness of Drag Me To Hell. However, if you're in the mood for a movie with its fair share of creepiness along with a little morality tale as well, Devil might just be the ticket.