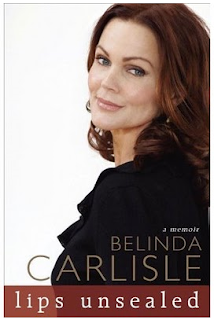 Although this is only entry 16 for the Year of 25 Books, I'll have you know that I'm all the way up to 20 as far as reading them goes. Clearly, I'm behind on blogging the books. Yes, I'm behind on reading as well. Only 8 weeks left in the year and 5 more to go. What can I say? The last half of the year has been a bit busier than I expected.

When I first heard about Belinda Carlisle's memoir, I knew that it would be a must read. The advent of Belinda's solo career coincided with my musical awakening which, in layman's terms means the point at which I stopped listening solely to Olivia Newton-John records. The Go-Gos actually predated me musically a little bit, although I was swift enough to figure out that she was the lead singer of the Go-Gos and "Our Lips Are Sealed" - the hit song from which the title of the book takes its name, was one of the first music videos I remember seeing (on HBO's Video Jukebox, no less.)

Belinda's solo work was such solid pop that I had no choice but to love it pretty much unconditionally. So the revelation in the book that she really is more of a punk rocker at heart was a bit of a surprise. The Go-Gos always seemed to flirt with punk, but they were grounded in such a pop sensibility that calling them punk would have certainly not been accurate. The book follows Belinda from her beginnings in southern California to the formation and break-up of the Go-Gos. It includes the years of her solo career which peaked in the late 80s with the album (and Dan favorite) Heaven on Earth only to see her fortunes fall steadily through the 90s. It is a pretty standard music autobiography - trials, tribulations, love, heartache and above all, drug use.

Belinda's drug use during the 80s is no secret. I remember reading or hearing somewhere (although now I am hard pressed to find the source) that there are some Go-Gos videos that she has absolutely no recollection of doing because she was so high on various drugs. Listening to Carlisle weave her tales of drug use in the 80s rock and roll scene makes me wonder how there were any drugs left in Los Angeles after she was done. The most amazing thing was that her drug use continued up until just a few years ago, although there were periods of sobriety, she's only been drug free for the last 5 years. And here I thought she'd left her drug habit in the dust 20 years ago! After reading the book, I think it's only her marriage and family that saved her from ending up dead from a drug overdose. In many ways, she's lucky to be alive (but not as lucky as Stevie Nicks - talk about someone that probably shouldn't have seen their 60s based upon the amount of drugs they did.)

The book is, like most rock-star memoirs, an incredibly easy read and I have no idea how much of it was ghost written, but it's very readable and entertaining. I have a love of biography because I am, by nature, just a bit of a snoop and just love to hear other people's life stories. And even though they are celebrities, they're still people. I think that's the thing that fascinates me the most. She does not, however, address the plastic surgery tragedy that is her face now.

I can't wait till Madonna gets around to writing her inevitable autobiography, but by then, will there be anything left to tell?
Posted by Dan at 10/30/2010 03:40:00 PM